AFP: Iran on Tuesday signaled it wanted closer cooperation with the UN atomic watchdog but said the Vienna-based agency must agree to “explicit” guidelines on how to proceed to solve a nuclear row. 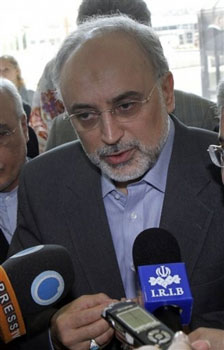 VIENNA, July 12, 2011 (AFP) – Iran on Tuesday signaled it wanted closer cooperation with the UN atomic watchdog but said the Vienna-based agency must agree to “explicit” guidelines on how to proceed to solve a nuclear row.

“Experts from both sides have to sit together and work out a mechanism to see how we can proceed,” Iranian Foreign Minister Ali Akbar Salehi said after talks with International Atomic Energy Agency (IAEA) chief Yukiya Amano.

But the “IAEA should come out and say that the first stage has been over” and that six outstanding issues have been answered.

“And it should be said in a very explicit way,” he added speaking at IAEA headquarters in the Austrian capital.

For his part, Amano reiterated the IAEA’s position that Iran is not meeting its obligations as listed in his February report and could not consider a new approach with Iran as the work plan agreed in 2007 was not complete.

“The Director General indicated that he is not in a position at this stage to consider the Work Plan to be completed,” the IAEA said in a statement.

Iran and the IAEA agreed in 2007 on a work plan for Tehran to answer outstanding concerns about its contested nuclear programme.

The Security Council has demanded, with both resolutions and sanctions, that Iran stop uranium enrichment, which produces fuel for civilian power reactors but can also make the raw material for atom bombs.

In its latest report the IAEA reiterated demands that Tehran clarify its position before the watchdog wraps up its probe into the Iranian nuclear programme.

Salehi was to meet his Austrian counterpart Michael Spindelegger for talks later Tuesday.

The European Union suspended a travel ban against Salehi, a former head of Tehran’s nuclear energy agency, in May.

Salehi, who became acting foreign minister in December and officially took charge as chief diplomat in February, had been barred from EU soil for his role in his country’s nuclear activities.

The decision to suspend the travel ban was taken by EU foreign ministers even as they expanded sanctions on the Islamic republic by adding more than 100 firms to a blacklist of companies hit by an assets freeze.

The EU and the United States have slapped unilateral sanctions on Iran on top of punitive measures imposed by the UN Security Council over Tehran’s refusal to halt sensitive nuclear fuel work.

Iran denies the charge and insists it is merely trying to produce civilian energy.

Reuters: Iran said on Tuesday it had arrested more...