Reuters: Iran is preparing to install centrifuges for higher-grade uranium enrichment in an underground bunker, diplomatic sources say, a development that is likely to add to Western worries about Tehran’s atomic aims. 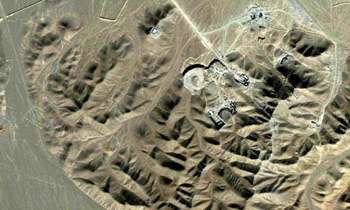 VIENNA (Reuters) – Iran is preparing to install centrifuges for higher-grade uranium enrichment in an underground bunker, diplomatic sources say, a development that is likely to add to Western worries about Tehran’s atomic aims.

Preparatory work is under way at the Fordow facility, tucked deep inside a mountain to protect it against any attacks, and machines used to refine uranium could soon be moved to the site near the clerical city of Qom, the sources said.

The Islamic Republic said in June it would shift production of uranium enriched to 20 percent purity to Fordow from its main Natanz plant this year and triple output capacity, in a defiant response to charges that it is trying to make atomic bombs.

Tehran only disclosed the existence of Fordow two years ago after Western intelligence detected it and said it was evidence of covert nuclear activities. The facility has yet to start operating.

“They are preparing (for the centrifuges to be installed) in Fordow,” one diplomatic source said.

Refined uranium can be used to fuel nuclear power reactors and also, if enriched to much higher levels, provide material for atomic arms.

Iran’s June announcement that it would move and boost output has drawn censure from the West, which has imposed increasingly tough sanctions on Tehran to try to force it to halt enrichment.

Carrying out the process in Fordow could provide greater protection for Iran’s uranium-purifying centrifuges against any U.S. and Israeli air strikes.

But its decision in early 2010 to raise the level of enrichment from the 3.5 percent purity needed for normal power plant fuel to 20 percent worried countries that saw it as a significant step toward the 90 percent needed for bombs.

Iran says it needs 20 percent uranium to make fuel for a medical research reactor after talks on a swap — under which other countries would have supplied the material — broke down.

“Enrichment from natural uranium to 20 percent is the most time-consuming and resource-intensive step in making the highly-enriched uranium required for a nuclear weapon,” British Foreign Secretary William Hague wrote in the Guardian newspaper this week.

“And when enough 20 percent enriched uranium is accumulated at the underground facility at Qom, it would take only two or three months of additional work to convert this into weapons grade material.”

The Institute for Science and International Security, a U.S.-based thinktank, has said the Fordow plant could, a year after its implementation, enable Iran “to more quickly break out and produce enough weapon-grade uranium for a nuclear weapon, if it chose to do so.”

Some Western experts say Iran is seeking to develop the means to make nuclear bombs.

Iran says that building nuclear bombs would be a strategic mistake and that it would also be against Islam.

“Our Supreme Leader (Ayatollah Ali Khamenei) has explained that the production and use of atomic weapons is wrong, not only in terms of foreign policy but on religious grounds,” Iranian Foreign Minister Ali Akbar Salehi said in Vienna on Monday.

In its latest report on Iran, in late May, the U.N. International Atomic Energy Agency said Iran had told it in February of plans to begin feeding nuclear material into enrichment centrifuges at Fordow “by this summer.”

But the IAEA added that as of May 21 no centrifuges — cylindrical machines spinning at supersonic speeds to increase the level of the fissile U-235 isotope — had been introduced into the facility.

Bloomberg: Iran and China suspended a contract to build...