Reuters: Major powers are willing to meet with Iran within weeks if it is prepared to “engage seriously in meaningful discussions” and address concerns about its nuclear programme, the European Union’s foreign policy chief told Tehran in a letter on Friday. 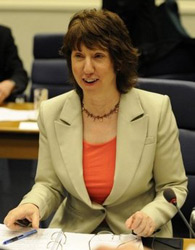 VIENNA (Reuters) – Major powers are willing to meet with Iran within weeks if it is prepared to “engage seriously in meaningful discussions” and address concerns about its nuclear programme, the European Union’s foreign policy chief told Tehran in a letter on Friday.

In a long-awaited response to an offer of talks last month from Iran’s chief nuclear negotiator Saeed Jalili, Catherine Ashton made clear her position that there must be no repeat of the last round of talks, which took place in January in Istanbul and ended with no progress.

EU foreign policy chief Ashton has been leading efforts on behalf of six countries — the United States, Britain, France, Germany and non-Western powers China and Russia — to negotiate with Tehran over its disputed atomic activities.

Iran has said it is willing to resume discussions, but insists that other countries recognise its right to enrich uranium, a major stumbling block, particularly for Western diplomats who see it as an unacceptable precondition.

They want Iran to agree to suspend enrichment activity which they suspect forms part of a covert weapons programme, and answer questions raised by the U.N. nuclear watchdog.

If Iran is ready to discuss concrete confidence-building measures without pre-conditions, “we would be willing to agree on a next meeting within the coming weeks at a mutually convenient venue,” Ashton said.

“I welcome your suggestion to resume talks, in order to take fundamental steps for sustainable co-operation,” she said in the letter, a copy of which was obtained by Reuters.

Her response to Jalili comes amid heightened U.S.-Iran tension. The United States accused Iran this week of a plot to kill the Saudi envoy to Washington, a charge Iran rejected as an attempt by its arch foe to further isolate it.

In Vienna, the U.N. International Atomic Energy Agency (IAEA) is next month expected to issue a report on Iran that will strengthen suspicions that it may be working to develop a nuclear missile. The document may provide the West with new arguments to impose further punitive steps on Iran.

But divisions have emerged among the six powers over the report, with Russia and China signalling concern it could hurt any chance for diplomacy and arguing Iran should be given time to study its content before it is published.

The United Nations has tightened sanctions on Tehran, and the six powers have offered Iran economic and political incentives if it suspends enrichment.

Iran says it needs refined uranium for a planned network of power plants, and has the right to produce it.

“When moving to continuation of our talks, it is crucial to look for concrete results and not to repeat the experience of Istanbul,” Ashton said. “We have to ensure that when we meet again we can make real progress on the nuclear issue.”

She said the goal “remains a comprehensive negotiated, long-term solution which restores international confidence in the exclusively peaceful nature” of Iran’s nuclear programme.

“In order to start such a process, our initial objective is to engage in a confidence-building exercise aimed at facilitating a constructive dialogue on the basis of reciprocity and a step-by-step approach,” the letter added.

US invites EU to sanction Iran over rights abuses

AFP: The US government suggested on Tuesday that Europe...

UPI: The Iranian tango, taking one step back then...