AP: Hundreds of people rallied outside the White House on Saturday, calling on President Barack Obama to remove an Iranian opposition group once allied with Saddam Hussein’s Iraqi regime from the U.S. list of terrorist organizations. 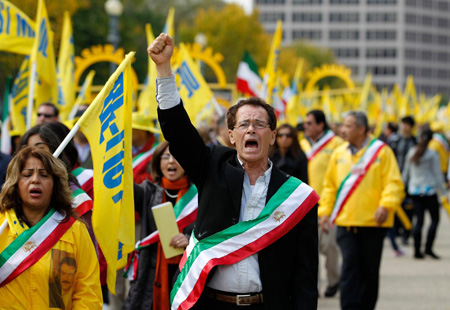 WASHINGTON (AP) — Hundreds of people rallied outside the White House on Saturday, calling on President Barack Obama to remove an Iranian opposition group once allied with Saddam Hussein’s Iraqi regime from the U.S. list of terrorist organizations.

Former Pennsylvania Govs. Tom Ridge and Ed Rendell were among speakers urging the U.S. to take the Mujahedin-e Khalq off the State Department’s list. Ridge, a Republican, was the nation’s first homeland security secretary. Rendell is a top Democrat who helped elect Obama.

“The only group that should be on the list is the country of Iran itself, under the rule of the mullahs,” Ridge said, noting recent U.S. allegations of a foiled Iranian plot to assassinate Saudi Arabia’s ambassador in Washington.

The U.S. added MEK to its terrorist list in 1997. But last year a federal court ordered the State Department to reconsider and meanwhile the group has rallied 97 members of Congress as well as many former high-ranking U.S. officials to its cause.

Delisting would allow the Paris-based group to raise money and operate in the U.S., which it is currently prohibited from doing.

The MEK carried out a series of bombings and assassinations against Iran’s clerical regime in the 1980s and fought alongside Saddam’s forces in the Iran-Iraq war. But the group says it renounced violence in 2001.

Ridge and Rendell said the MEK has not been linked to any terrorist attacks since that time. They pointed out that the European Union and the United Kingdom have concluded that the MEK is not a terrorist organization and called on Obama to reach the same decision.

Critics of the MEK say it has cult-like characteristics and that delisting it would be seen even by moderate Iranians as an endorsement by the U.S. of terrorism. A 2010 State Department report on the MEK said: “The group’s worldwide campaign against the Iranian government uses propaganda and terrorism to achieve its objectives.”

MEK spokesman Ali Safavi called the State Department’s description “a political statement and not a factual one.” He said the group would not have such broad Congressional support if it was engaged in terrorist activities.

Obama left the White House for the drive to Andrews Air Force Base in suburban Maryland to play golf as the demonstration began, and it’s not clear if he heard any of it.

During the rally, the mostly Iranian-American crowd broke into regular chants of “MEK, yes. Mullahs, no. They are terrorists. They must go,” and “President Obama, listen to us. MEK listing is unjust.”

The event was organized by the Iranian American Professionals and Scholars of Maryland.

Organizers say the MEK was put on the terror list to appease Iranian leaders, but has only given the regime an excuse to arrest and kill dissidents in Iran and Iraq. They contend that delisting would strengthen a major Iranian opposition group.

The MEK has revealed the existence of several important Iranian nuclear facilities.

U.S. officials say that Iran is laying the groundwork for a nuclear weapons program, although its leaders may not have decided to build a bomb. Iran says its nuclear ambitions are entirely peaceful.

Speakers at the protest also urged the U.S. to continue supporting more than 3,000 former MEK fighters and others living at Camp Ashraf near Iraq’s border with Iran. The Iraqi government wants to close the camp and Iraqi security forces have twice raided Ashraf, most recently in April. The U.N. said at least 34 people were killed in that incident.

The U.S. has pledged to protect camp residents from violence, but those rallying outside the White House said Obama’s announcement of a complete pullout of Iraq by the end of the year could make that promise difficult to keep.

Darlene Superville can be reached at http://www.twitter.com/dsupervilleap

By Jubin Katiraie The latest coronavirus news about Iran’s...