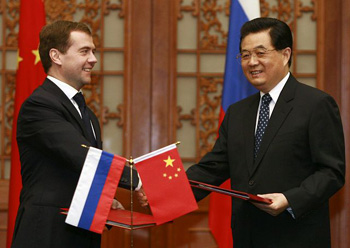 The diplomatic note to International Atomic Energy Agency chief Yukiya Amano points to an East-West rift among the five permanent members of the U.N. Security Council over how to deal with concerns about Iran’s nuclear activities.

The United States, Britain and France want Amano to share what his agency knows or suspects about Iran’s alleged weapons experiments with the IAEA’s 35-nation board at its meeting next month. But Russia’s and China’s opposition likely will delay Western hopes of having the board report Tehran to the Security Council for the second time for its nuclear defiance, a referral that could open Iran to more sanctions.

In the note, Moscow and Beijing warn Amano against “groundless haste” and urge him to “act cautiously,” adding that “such kind of report will only drive the Iranians into a corner making them less cooperative.”

An international official familiar with the matter said Amano plans to go ahead nonetheless, arguing that it is his duty to inform the decision-making board of evidence pointing to such experiments.

Russia, China, the United States, Britain, France and Germany are formally unified in trying to persuade Iran to meet concerns over its nuclear program. But a diplomat briefed on the matter said he was told that the Russians and Chinese went to Amano without consulting the other nations.

The diplomat suggested that the fractures within the group may hinder any new attempt to engage Iran in talks over its nuclear program. He, like others who consented to talk about privileged issues, asked for anonymity.

“The burden remains on Iran to answer the IAEA’s questions, which it has thus far refused to do,” he said in an e-mail.

Iran is under four sets of U.N. Security Council sanctions for not mothballing a program that can make both nuclear fuel or fissile warhead material. It has rapidly expanded such activities since they were discovered in 2002, and concerns have grown as the country has refused to let the IAEA probe growing intelligence-based allegations that it is working on a nuclear warhead and other aspects of a weapons program.

Tehran insists, however, it is only interested in nuclear power, not weapons. It says the intelligence is fabricated by the United States and its allies.

In its efforts to blunt pressure, Iran has found economic and strategic allies in both China and Russia. Since the IAEA asked for Security Council involvement five years ago, these two nations have supported U.N. and other sanctions only reluctantly and on condition they be watered down.

In contrast, Washington, London and Paris continue to seek tougher U.N. sanctions, and their determination to ramp up pressure on Tehran has only increased in the wake of an alleged Iranian plot to assassinate the Saudi ambassador to Washington revealed earlier this month.

Both Moscow and Beijing have reacted with caution to those allegations and continue to oppose toughening pressure on Iran over its nuclear activities. That is a stance that contrasts with the Western view — and which was clearly enunciated in their diplomatic note to Amano.

In an allusion to Washington, London and Paris, they warned that “certain members of the IAEA Board of Governors will most probably use (such) a separate report … as a pretext” to again report Iran to the Security Council.

“This is a straight way forward to a new UNSC resolution on sanctions against Iran,” said the note. The two nations, it said, “are definitely seriously concerned about such a development.”

For months, the U.S. and its allies had been contemplating pushing for renewed IAEA referral of Iran to the Security Council using a strongly worded Amano report as a springboard — a strategy that a second diplomat said now seemed unlikely considering strong Russian and Chinese disapproval.

The diplomat, who is from an IAEA member nation, said that the West now may try to garner support for an IAEA resolution that gives Iran until March to cooperate with U.N. agency attempts to probe the arms allegations.

Missing that deadline on the part of Tehran could trigger renewed referral to the Security Council, he said.

The diplomat said the evidence making a case for fears about secret nuclear weapons experiments will be backed up by documentation reflecting “cross-checks” of intelligence provided by various nations. He and the other diplomat both said that Iran will be given a copy of the summary and asked to respond before it is presented to the IAEA board.

In his previous report to the board in September, Amano said his agency is “increasingly concerned” about a stream of intelligence suggesting that Iran continues to work secretly on developing a nuclear payload for a missile and other components of a nuclear weapons program.

The restricted report obtained by the AP said “many member states” are providing evidence for that assessment, describing the information it is receiving as credible, “extensive and comprehensive.”

Tehran denies secretly experimenting with a nuclear weapons program and has blocked a four-year attempt by the IAEA to follow up on intelligence that it secretly designed blueprints linked to a nuclear payload on a missile, experimented with exploding a nuclear charge, and conducted work on other components of a weapons program.

In a 2007 estimate, the U.S. intelligence community said that while Iran had worked on a weapons program such activities appeared to have ceased in 2003. But diplomats say a later intelligence summary avoided such specifics, and recent IAEA reports on the topic have expressed growing unease that such activities may be continuing — although in a less concerted fashion.

George Jahn may be reached at http://twitter.com/georgejahn

Reuters: The United States on Monday said it welcomed...

UK to change envoy to Iran