AFP: The United States on Friday welcomed the UN atomic watchdog’s resolution of “deep and increasing concern” about Iran’s nuclear activities and called for more pressure on Tehran to end them. 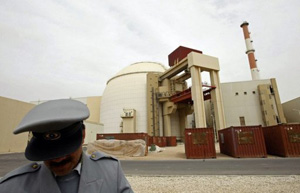 WASHINGTON (AFP) — The United States on Friday welcomed the UN atomic watchdog’s resolution of “deep and increasing concern” about Iran’s nuclear activities and called for more pressure on Tehran to end them.

A White House statement said an International Atomic Energy Agency report explains “in graphic detail Iran’s systematic efforts to develop a nuclear weapon,” and that “the whole world now knows that Iran not only sought to hide its uranium enrichment program from the world for more than two decades.”

The statement noted that President Barack Obama “has stated on multiple occasions that we are determined to prevent Iran from acquiring nuclear weapons” and that “a nuclear armed Iran would represent a grave threat to regional peace and international security.”

“This is why we have worked with others to build a broad international coalition to pressure and isolate the Iranian regime, including through an unprecedented sanctions regime,” the statement added.

“The United States will continue this pressure until Iran chooses to depart from its current path of international isolation, both in concert with our partners as well as unilaterally.”

The resolution adopted in Vienna said it was “essential for Iran and the Agency to intensify their dialogue” and called on Tehran “to comply fully and without delay with its obligations under relevant resolutions of the UN Security Council.”

But to assuage Chinese and Russian misgivings, the resolution has no timeframe for Iran to comply, calling instead for IAEA head Yukiya Amano to report to the board in March on Tehran’s “implementation of this resolution.”

Iran has denied it is developing nuclear weapons and on Friday said the UN resolution had only strengthened “the determination of the Iranian nation to continue its nuclear activities for peaceful purposes without any compromise.”

US Secretary of State Hillary Clinton said the UN report supplied “the clearest confirmation of what the United States has long believed — that, despite its constant denials, Iran’s government has pursued technologies and equipment that could only be applied to a nuclear weapons program.”

“We commend the director general and his staff for their thorough, detailed and professional report,” Clinton added in a statement.

“In the coming weeks, we will work with our international partners to increase the pressure on Iran’s government until it decides to meet its international obligations.”

By Pooya Stone The Iranian people have been out...