Iran open for IAEA talks, no word on Parchin – diplomats

Reuters: Iran says it is ready to resume talks with the U.N. nuclear watchdog two months after their last meeting ended in failure, but still appears to be stonewalling a request for access to a key military site, Western diplomats said on Thursday.
By Fredrik Dahl 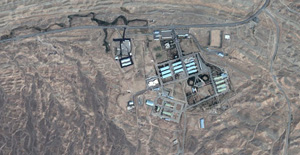 VIENNA (Reuters) – Iran says it is ready to resume talks with the U.N. nuclear watchdog two months after their last meeting ended in failure, but still appears to be stonewalling a request for access to a key military site, Western diplomats said on Thursday.

Just days after Iran and six world powers restarted negotiations in Istanbul, the Islamic Republic delivered a letter to the International Atomic Energy Agency (IAEA) on holding new discussions with the U.N. body as well.

But Vienna-based diplomats said it did not mention the IAEA’s most pressing demand – that its inspectors be allowed to visit the Parchin military site southeast of Tehran, where the agency believes nuclear-relevant research may have taken place.

IAEA chief Yukiya Amano told Reuters last month he did not rule out that Iran may be trying to remove evidence prior to any visit. Western diplomats say they suspect the site is being “sanitised”, a charge Tehran dismisses.

Iran’s ambassador to the IAEA, Ali Asghar Soltanieh, handed over the letter to senior agency officials on Tuesday which said Tehran is “ready to resume the negotiations”, one Western diplomat said.

But, another envoy said, it “does not offer the agency access to Parchin”.

A third diplomat said, the IAEA may decide to travel to Tehran again in any case, before a meeting of the agency’s 35-nation governing board in early June to show that it is giving “dialogue a chance”.

Neither the IAEA nor Iran was immediately available for comment on the issue.

Iran’s overtures to the U.N. agency, which is tasked with preventing the spread of nuclear weapons in the world, coincides with renewed diplomacy between the Islamic state and the six world powers.

Both Tehran and the powers said they were content with progress made in last Saturday’s talks in Istanbul which did not go into detail but, unlike earlier rounds of negotiations, stayed on the subject of Iran’s nuclear programme.

Iran’s foreign minister said on Monday that his country was ready to resolve all nuclear issues in the next round of talks with the powers – the United States, Germany, France, Russia, China and Britain – if the West starts lifting sanctions.

The United States has ruled out, however, any easing of punitive measures before Tehran takes concrete and significant action to allay suspicions over its disputed nuclear programme.

“The negotiations may be long, arduous, and ultimately unsatisfactory,” said Alireza Nader, a senior analyst at RAND Corporation, a U.S.-based research group.

Western powers suspect Iran is seeking to develop the capability to make nuclear bombs. Iran, one of the world’s largest oil producers, says its programme is a peaceful project to generate electricity and produce medical isotopes.

An IAEA report late last year revealed a trove of intelligence pointing to research activities in Iran of use in developing the means and technologies needed to assemble nuclear weapons, should it decide to do so.

The U.N. agency’s document lent independent weight to Western suspicions and paved the way for the United States and its European allies to dramatically ratchet up sanctions against Iran, targeting its lifeblood oil exports.

One salient finding in the report was information that Iran had built a large containment chamber at Parchin in which to conduct high-explosives tests that the IAEA said are “strong indicators of possible weapon development”.

Two rounds of meetings between a senior IAEA team and Iran in January and February in Tehran failed to produce any breakthrough in the nuclear dispute, with Iran not granting access to Parchin.

Iran has rejected suspicions aired about the site as “ridiculous” and “childish”.

But RAND’s Nader said Iran must come clean “regarding clandestine work directly related to nuclear weaponisation”, including opening up sites such as Parchin to inspections.

Iran Says It Won’t Negotiate, `Back Down’ on Uranium