Reuters: Iran expressed hope on Monday that a planned meeting with the U.N. nuclear watchdog next month would lead to a “framework of cooperation” on a possible visit by inspectors to the Parchin military site. 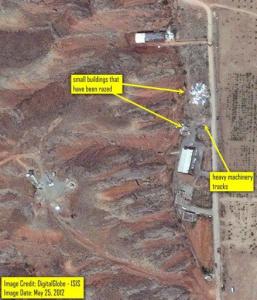 DUBAI (Reuters) – Iran expressed hope on Monday that a planned meeting with the U.N. nuclear watchdog next month would lead to a “framework of cooperation” on a possible visit by inspectors to the Parchin military site.

The International Atomic Energy Agency (IAEA) believes Tehran may have conducted explosives tests that could help develop nuclear weapons at Parchin and may be cleaning up the site to remove evidence. Iran has denied this, saying Parchin is a conventional military complex.

Iranian Foreign Minister Ali Akbar Salehi expressed optimism over talks due to be held on December 13 between Iran and the IAEA in Tehran.

“We are hopeful that with the positive step Iran has taken in resolving this issue … this meeting will identify a framework of cooperation in regards to the issue of a visit to Parchin,” Salehi was quoted as saying by the Iranian Students’ News Agency

Salehi did not give details, but Iran has previously said a framework deal on how the watchdog should conduct its investigation must be agreed before any agency visit to Parchin.

A series of meetings this year between the IAEA and Iran, the most recent in August, has failed to make concrete progress and Western diplomats have accused Tehran of playing for time.

Tehran says its atomic program is peaceful, but Western nations believe it is aimed at developing weapons.

Amano said in Baghdad on Sunday that “activities at Parchin are ongoing”, a reference to Iran’s alleged clean-up work, although he did not give further details.

The IAEA has said it hoped the talks in Tehran would produce an agreement to allow it to resume a long-stalled investigation into possible military dimensions of Iran’s nuclear program.

But Vienna-based Western diplomats, speaking before Salehi’s comments, expressed scepticism that the new meeting would yield a breakthrough.

“Our initial impression is that there is no indication from Iran that they are prepared to engage any more or any differently on substance than they have in the past year,” one envoy said.

Amano also said on Sunday the IAEA had an “essential role” to play in breaking the stalemate.

“It is in the interest of Iran and the international community,” Amano said. “That is why I think there is some big reason that Iran will get cooperative for us. But at the same time, the situation is very difficult and worrying and I do not want to speculate.”

(Reporting by Yeganeh Torbati in Dubai, Fredrik Dahl in Vienna and Patrick Markey in Baghdad; Editing by Pravin Char)

Middle East Times: The U.S. Department of the Treasury...