No deal seen clinched in U.N. nuclear talks with Iran

Reuters: The U.N. nuclear watchdog and Iran appear to have failed again in talks this week to finalize a deal to unblock an investigation into suspected atom bomb research in the Islamic state, a diplomatic source said on Thursday. By Fredrik Dahl and Yeganeh Torbati 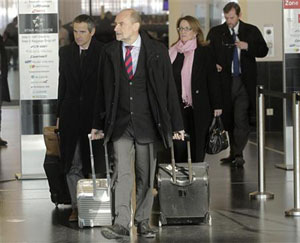 VIENNA/DUBAI (Reuters) – The U.N. nuclear watchdog and Iran appear to have failed again in talks this week to finalize a deal to unblock an investigation into suspected atom bomb research in the Islamic state, a diplomatic source said on Thursday.

The U.N. International Atomic Energy Agency (IAEA) and Iran were expected to hold a further meeting on February 12, following two days of negotiations in Tehran that ended on Thursday, the source added, giving no further details.

The apparent absence of a breakthrough in the January 16-17 discussions in the Iranian capital signaled a new setback for efforts to allay mounting international concern over Tehran’s atomic aims and help avert the threat of a new Middle East war.

The Vienna-based U.N. agency had hoped to clinch an elusive framework agreement with Iran that would allow the IAEA to resume a long-stalled inquiry into suspected military dimensions to the country’s nuclear program.

The IAEA, whose mission is to prevent the spread of nuclear weapons, has been trying for a year to negotiate a so-called structured approach with Iran giving the inspectors access to sites, officials and documents for their investigation.

The IAEA team led by Deputy Director General Herman Nackaerts was due to return to Vienna early on Friday.

There was no immediate comment from the U.N. agency, which after a previous meeting with Iran in mid-December said it expected an agreement to be concluded in this month’s talks. Western diplomats later said key differences remained.

World powers were monitoring the IAEA-Iran talks for any signs as to whether Tehran, facing intensifying sanctions pressure, might be prepared to finally start tackling mounting international concerns about its nuclear activity.

The six powers – the United States, France, Germany, China, Russia and Britain – and Iran may resume their separate negotiations later in January to try to reach a broader diplomatic settlement. They last met in June.

Israel – a U.S. ally believed to have the Middle East’s only nuclear arsenal – has threatened military action if diplomacy and economic sanctions intended to rein in Iran’s uranium enrichment program do not resolve the stand-off.

Iran denies Western accusations that it is seeking to develop a nuclear weapons capability, saying its program is aimed only at power generation and medical research.

The IAEA’s immediate priority was to visit the Parchin military base southeast of Tehran, where it suspects explosives tests relevant for production of nuclear weapons may have taken place, perhaps a decade ago, accusations Tehran denies.

Western diplomats say Iran has worked for the past year to remove any incriminating evidence from Parchin, but IAEA chief Yukiya Amano said late last year a visit would still be useful.

Before leaving Vienna, Nackaerts said his team was ready to visit Parchin immediately if access were granted.

Tehran has said a framework accord with the IAEA should be reached before any visit to Parchin is allowed. It says the site is a conventional military facility and has dismissed accusations of ongoing “sanitization” there.

The United States late last year set a March deadline on Thursday for Iran to start cooperating in substance with a U.N. nuclear agency investigation, warning Tehran the issue may otherwise be referred to the U.N. Security Council.

Analysts and diplomats have said they still see a window of opportunity for world powers to make a renewed diplomatic push to find an overall negotiated solution to the dispute after U.S. President Barack Obama won re-election in November.

The six powers want Iran to scale back its uranium enrichment program and cooperate fully with the IAEA. Iran wants the West to first lift sanctions hurting its economy. Both sides say they want to resume the talks soon.

Reuters: The governor of Florida, who is on a...

Trump: Avoid Past Administrations’ Mistake of Believing in a Moderate Iran

Iran Focus London, 6 Dec - In an article for Politico...