What’s in the Iran Deal

Wall Street Journal: Western officials said the deal will halt the growth of Iran’s nuclear program; roll back key parts of the nuclear complex; step up monitoring; and expand the time it will take Iran to “break out” and produce weapons-grade fuel.
The Wall Street Journal

By Jay Solomon and Laurence Norman 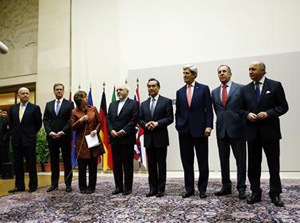 The historic deal struck between Iran and world powers is an interim agreement that gives each side a small portion of their demands.

Western officials said the deal will halt the growth of Iran’s nuclear program; roll back key parts of the nuclear complex; step up monitoring; and expand the time it will take Iran to “break out” and produce weapons-grade fuel.

Iran says it is receiving a break from economic sanctions and international recognition that it is entitled to pursue a civilian nuclear program.

-Iran must cease all uranium enrichment above 5% purity.

-International powers will recognize the right of the Iranian people to access peaceful nuclear energy.

-Iran must not increase its stockpile of low-enriched uranium.

-Centrifuges capable of enriching uranium beyond 5% purity will be disconnected.

-Iran will not install any new centrifuges. Old units will not be replaced with new ones. Iran can’t increase the number of enrichment facilities in the country.

-Iran will not amass new centrifuges that can be quickly put into place if long-term talks collapse.

-Daily inspections will be held for the first time at the Natanz and Fordow facilities, replacing weekly inspections. New access to centrifuge production sites, uranium mines and mills, design information on the Arak nuclear power reactor.

-Iran agrees to some of the provisions contained in a document known as the “additional protocol,” an agreement with the United Nations’ nuclear watchdog, the International Atomic Energy Agency. Iran under the provision would provide expanded information on plans for reactors and production sites.

-No advancement in work on the plant will take place during the interim agreement.

-Iran will not dismantle Arak or begin dismantling it during the agreement.

-If it chose to rapidly produce weapons-grade material, Iran will need weeks to months longer than it would need without the interim agreement. With less higher-enriched uranium, fewer centrifuges and more inspectors, international powers would have more time and wherewithal to spot a “breakout” attempt, Western officials say.

-Iran will receive overall relief believed to equal $6 billion to $7 billion during the interim agreement.

-Iran will have better access to its own funds for humanitarian initiatives.

-Sanctions are being suspended on petrochemical exports.

-Sanctions are being suspended on dealing in gold and precious metals.

-Most sanctions affecting Iran’s auto industry are being suspended, so leaders can work on making it a major part of its economy.

-Sanctions are being eased on airplane parts, including by ensuring parts are used for flight safety and not, for example, for military radar.

-Any restricted Iranian funds may now be used for purchasing medical equipment. West will watch to make sure purchases are from recognized firms and not unknown companies with suspect motives.

-All relief is considered limited, temporary and reversible. International powers will maintain core sanctions on banking and oil. Any measures can be reversed if Iran doesn’t meet its commitments.

-West will retain right to impose new sanctions if agreement is violated.

Why Iran Does Not Purchase Covid-19 Vaccines

In Iran, media outlets controlled by the Supreme Leader...

In less than a week, the Islamic Republic will...