Reuters: China said on Wednesday it “resolutely opposes” U.S. sanctions that could harm non-proliferation work between the two countries after Washington laid charges against a Chinese businessman accused of allegedly procuring missile parts for Iran. 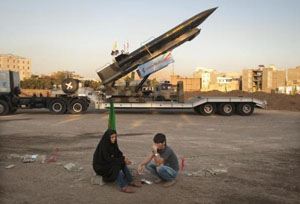 BEIJING (Reuters) – China said on Wednesday it “resolutely opposes” U.S. sanctions that could harm non-proliferation work between the two countries after Washington laid charges against a Chinese businessman accused of allegedly procuring missile parts for Iran.

In a signal Washington would keep pressure on Iran over its nuclear program, the U.S. State Department also offered up to $5 million for information leading to businessman Li Fangwei’s arrest or conviction.

Federal prosecutors also seized $6.9 million in funds that had been traced to Li.

“China resolutely opposes the United States citing domestic law to unilaterally impose sanctions on Chinese companies or individuals. We believe that what the United States has done will not help resolve the issue and will harm bilateral cooperation on counter proliferation, China’s Foreign Ministry spokesman Qin Gang said.

China pays great attention to anti-proliferation export controls and will “seriously deal” with any violations of its laws, Qin told reporters at a regular press briefing.

“China urges the United States to stop these wrong acts of putting sanctions on Chinese companies and individuals and return to the correct path of anti-proliferation cooperation,” Qin said.

Li has been the target of U.S. sanctions in the past for his alleged role as a supplier to Iran’s ballistic missile program.

In 2009, he was charged with selling restricted materials to Iran by the Manhattan District Attorney and Treasury banned him and his company, LIMMT, from conducting business in the United States without a license or authorization.

Contacted by Reuters on Feb 4, 2013, for an earlier story about his business, Li said he continued to get commercial inquiries from Iran but only for legitimate merchandise. Li said his metals company, LIMMT, had stopped selling to Iran once the United States began sanctioning the firm several years ago.

Calls to multiple telephone numbers of LIMMT, based in the northeastern Chinese city of Dalian, either went unanswered, or the person answering hung up when asked for Li.

Described as a “known proliferator” and a “principal supplier” to Iran’s ballistic missile program, Li has also been accused of trying to buy materials from the United States, China and other countries that could be used by Iran to produce or deliver weapons of mass destruction.

Iran and a group of world powers reached a temporary agreement in November under which Tehran would get about $7 billion in sanctions relief in return for steps to restrain its nuclear activities.

In March, a U.S. official said Iran had pursued buying banned components for its nuclear and missile programs, even while it was striking the interim deal to limit its disputed nuclear program.

Man hanged in public in Arak

By Pooya Stone Soheila Hijab Bid Sarakhsi is a...