Kerry: Nuclear talks with Iran “could go either way” 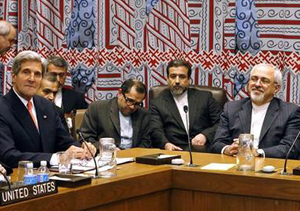 Negotiators from the P5+1 countries – Britain, China, France, Germany, Russia and the United States – and Iran are in Vienna trying to strike a deal whereby Tehran would curb parts of its nuclear program in exchange for sanctions relief.

“This evening, my foreign minister colleagues are returning here to Vienna. And it is now time to see whether or not we are able to close an agreement. In many ways, this negotiation has been going on for literally a number of years. And over the past few days, we have in fact made genuine progress. But I want to be absolutely clear with everybody: We are not yet where we need to be on several of the most difficult issues”, Kerry said.

“The truth is that while I completely agree with Foreign Minister Zarif that we have never been closer, at this point, this negotiation could go either way. If hard choices get made in the next couple of days and made quickly, we could get an agreement this week. But if they are not made, we will not”.

“So our teams remain very hard at work. In the coming hours and days we’re going to go as hard as we can. We are not going to be negotiating in the press. We’ll be negotiating privately and quietly. And when the time is right, we will all have more to say”, he added.

Last Tuesday was the official deadline to reach a long-term deal that would build on the preliminary agreement in Lausanne, but the seven countries have agreed to extend the deadline until 7 July to allow more time for negotiations.

Diplomats have said the real deadline is 9 July, the latest the deal can be presented to the US Congress to limit to 30 days a mandatory review period before Obama can begin suspending sanctions. After that, the review would last 60 days, with growing risks a deal could unravel.

US President Barack Obama warned Iran on Tuesday that there would be no nuclear deal if Tehran does not agree to “serious, rigorous” inspections of its facilities.

“The goal of the nuclear negotiations is not to rely on trust, but to set up a verifiable mechanism where we are cutting off the pathways for Iran to obtain a nuclear weapon”, Obama said.

Iran’s main opposition group, the National Council of Resistance of Iran (NCRI), last month published a 28-page report stating that Iran has been trying to keep its nuclear infrastructure intact and retain the capability to produce a nuclear weapon. It said Iranian Supreme Leader Ali Khamenei had put red lines for international inspectors having access to Iranian military sites and nuclear scientists and any halt to nuclear Research and Development (R&D).

The NCRI, the group which first blew the whistle on Iran’s secret uranium enrichment and heavy-water sites in 2002, on Wednesday also warned that without “complete unrestricted access” to international inspectors to monitor Iranian military facilities, Iran could not be trusted to abide by the terms of the international agreement.

It published a partial list of Iranian nuclear sites that it had exposed and which Tehran had previously kept secret.