Bombing campaign an alternative to Iran deal: US congressman 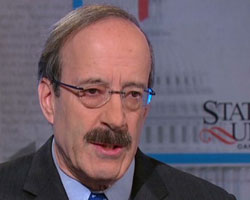 Washington, 10 Jul – An alternative to ongoing international negotiations to limit Iran’s nuclear ambitions is to bomb its facilities, according to a senior member of US President Barack Obama’s Democratic Party in the US House of Representatives.

“No deal is better than a bad deal”, he said during a House committee hearing on a possible agreement between the world powers and Iran aimed at curbing Tehran’s nuclear activities in return for the lifting of international sanctions.

“The alternative to a deal would surely mean some kind of military strikes on Iran’s nuclear plant”.

“It’s not just accepting the deal or nothing”, he added. “There are things we’re going to have to come to grips with, and I believe one of them is bombing the nuclear reactor”.

Even with sanctions in place, Iran is the “largest state of terrorism on world”, and its finances instability “in Yemen, Syria, Iraq, Gaza and its Gulf allies”, Engel said.

The comments from Engel — who has cautiously viewed the Obama administration’s plans for a deal — increase the stakes for US negotiators, who appear to be closing in on the final terms of a deal. They also speak volumes about the few choices facing congressional lawmakers, who will have the opportunity to weigh in on the deal if one is reached in coming days.

During a separate hearing on Capitol Hill on Thursday, President Obama’s choice to be the next chairman of the Joint Chiefs of Staff, Gen. Joseph Dunford, told lawmakers that the US would have the ability to destroy Iran’s nuclear program, if it so chose.
But that would only be temporarily, Engel maintained.

“If we are able to sustain the sanctions regime and have a bombing of their plant that sets them back two years or three years, is that really a viable alternative?” he asked.
Lawmakers in Congress will be able to block the terms of the deal, assuming one is reached. But widespread scepticism in both parties could pose a hurdle to the Obama administration, which is negotiating the deal along with five other nations and Iran.

“That’s a bad deal for us: permanent concessions in exchange for temporary benefits — and that’s only if Iran doesn’t cheat like North Korea did”, Rep. Ed Royce, the Republican Chairman of the House Foreign Affairs Committee, said during a hearing on the negotiations on Thursday. “So Iran is left a few steps away from the bomb and more able to dominate the region — this is my take on this”.

Rep. Darrell Issa, a Republican from California, said that the early outline of the deal was “the equivalent of the entire World War II Luftwaffe sitting on the ground with the promise that although the fuel tanks are right next to the planes, they won’t fully load the planes and the bombs for 10 years”.

“That’s kind of where we are”, he said. “We’re letting them have all the weapons of war”.

Some Democrats also expressed their scepticism of the plan, with Rep. Ami Bera (D-Calif.) saying he had “legitimate concerns” that the deal could needlessly bulk up the Iranian economy without giving international inspectors unfettered access to ensure Tehran is living up to its side of the bargain.

If Congress votes to approve the current deal, “then we have to the greatest extent possible locked ourselves into a deal in which in 12 years we have a nuclear Iran”, said Rep. Brad Sherman (D-Calif.). “So we shouldn’t do that”,

Yet it remains unclear exactly how much power Congress will be able to wield.

Even if lawmakers vote to block the deal, President Obama could veto the resolution. For Congress to override him, there needs to be two-thirds majorities in both chambers.

Iran MPs to vote on rest of Ahmadinejad cabinet

US urges return of 2 American women held by Iran