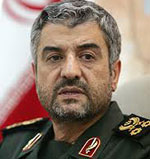 The objection, by Maj. Gen. Mohammad Ali Jafari, appeared to open a new point of contention within Iran’s political hierarchy.

General Jafari’s remarks, reported in an interview with Iran’s state-run Tasnim news agency, appeared to be primarily concerned with the restrictions in the Security Council resolution on the Iranian regime’s missile capabilities.

The interview was published as the Security Council voted to approve the resolution, which sets in motion a process for the United Nations sanctions on Iran to be vacated over time.

“Some of the points inserted in the draft are clearly in contradiction to the Islamic Republic of Iran’s major red lines and violate them, particularly regarding arms capabilities, and we’ll never accept it”, General Jafari was quoted as saying, referring to the Security Council resolution.

He said that what troubled him the most was what he saw as the resolution’s violation of “the very critical red line, namely maintaining and upgrading Iran’s defence capabilities”.

Under the Security Council resolution approved on Monday, another resolution will be required that lifts restrictions on Tehran’s ballistic missile activities after eight years. This was part of a compromise worked out by diplomats at the nuclear talks to avert an impasse.

Reuters: Iran has failed to meet a U.N. Security...