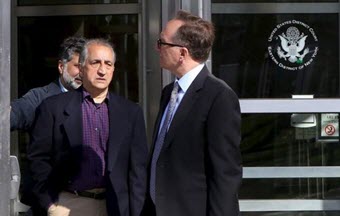 New York, 24 Mar – A consultant to Iran’s mission to the United Nations has been criminally charged with violating a United States law against dealing with that country, according to an indictment made public on Wednesday.

Federal prosecutors unveiled the charges a few hours after a hearing in federal court in Brooklyn, New York, where US District Judge Pamela Chen set a $3 million bond for Sheikhzadeh.

Sheikhzadeh was arrested nearly three weeks ago, court records show, and had pleaded not guilty at a prior hearing.

“We will vigorously fight these charges”, his lawyer Steve Zissou said outside of court. The defendant has lived in the US since he was 18, Zissou added.

The case came just two months after Iran emerged from years of economic isolation when world powers led by the US and the European Union lifted crippling sanctions against Iran, in return for curbs on Tehran’s nuclear ambitions.

According to the indictment, Sheikhzadeh was paid a regular cash salary by the Iran mission, often through a colleague employed there, and deposited it into a Citibank checking account.

The defendant “did not obtain any license from the (US) Department of Treasury” authorizing these and other activities, Reuters quoted the indictment as saying.

At Wednesday’s hearing, Chen restricted Sheikhzadeh from going to the Iranian mission and limited his contact with people there, after a prosecutor expressed concern about whether the defendant might seek sanctuary or become a flight risk.

“He does work for a hostile government”, and the mission might be a “potential safe haven for him”, Assistant US Attorney Tali Farhadian told the judge.

Farhadian also said Sheikhzadeh had family in Iran who has “substantial assets”.

Iran and the US have no diplomatic relations.

The bond will be secured by property belonging to Sheikhzadeh’s brother, who worked at New York University. About $800,000 of Sheikhzadeh’s assets have also been frozen, Farhadian said.

The Diplomat: The Iranian regime is building up to...