Iran and North Korea Are Linked, No Matter What Pro-Iran Lobby Says 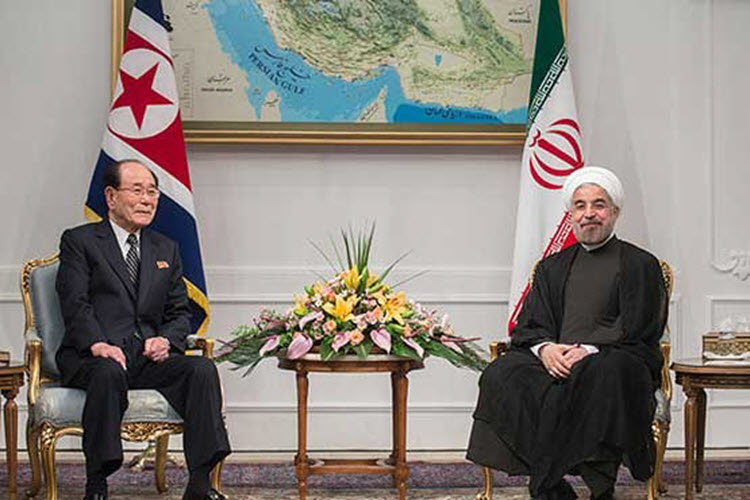 London, 21 Aug – The pro-Iran Lobby in the US has warned against conflating the Iranian and North Korean regimes, claiming that Iran does not have access to nuclear weapons.

Reza Marashi of the National Iranian American Council. (NIAC) recently wrote: “First, conflating Pyongyang and Tehran is troublesome for an obvious reason: One has the bomb, and the other does not.”

However, Iranian President Hassan Rouhani told Iranian lawmakers last week, if Iran walked away from the 2015 nuclear deal it could restart its nuclear programme in mere hours and have access to a bomb in little time.

The deal, signed between Iran and six world powers, was supposed to delay the nuclear weapons threat from Iran for more than a decade, but in reality it has not.

Marashi also claims in the peace that the US’s confronting of other rogue regimes with nuclear ambitions (Libya and Iraq) have only motivated Iran to work harder to build their nuclear programme.

So, according to that theory, the Iranian Regime is only pursuing a nuclear programme because the US stopped other regimes from having nuclear weapons. Does that sound like how a government makes decisions?

Marashi also tries to paint the Iranian Regime’s mistrust of the US with regards to the nuclear deal as a result of Donald Trump’s decisions to pull out of the transpacific trade deal and the Paris climate change agreement but Iran was deeply mistrustful of Washington before Trump pulled out of those deals.

He even writes that the nuclear deal was doomed to fail as the US never had any intention of allowing Iran to access nuclear weapons even after the deal had ended.

Marashi wrote: “If Trump corrects course and fully implements Washington’s [nuclear deal] obligations, the risk of Tehran pursuing Pyongyang’s path is slim to none. The longer he continues violating the terms of the deal, the more likely it becomes that Iran resumes systemically advancing the technical aspects of its nuclear program – without the unprecedented, state-of-the-art monitoring and verification regime currently in place.”

These are lies- plain and simple. The regime in Tehran never intended to fully give up its nuclear programme, wanting it ready to go the moment they broke the deal. That is why Iran placed so many restrictions on the independent inspections, banning inspectors from Iran’s military bases and only allowing the collection of soil samples after it had been tampered with to show lower levels of nuclear activity.

Marashi also never mentions that word “missile” which is how Iran and North Korea are truly linked. North Korea licensed its ballistic missile technology to cleric ruling Iran and has provided upgrades, improvements and technical advice over the years.

Iran vows not to back down on uranium enrichment

By Pooya Stone Unemployment is one of the biggest...