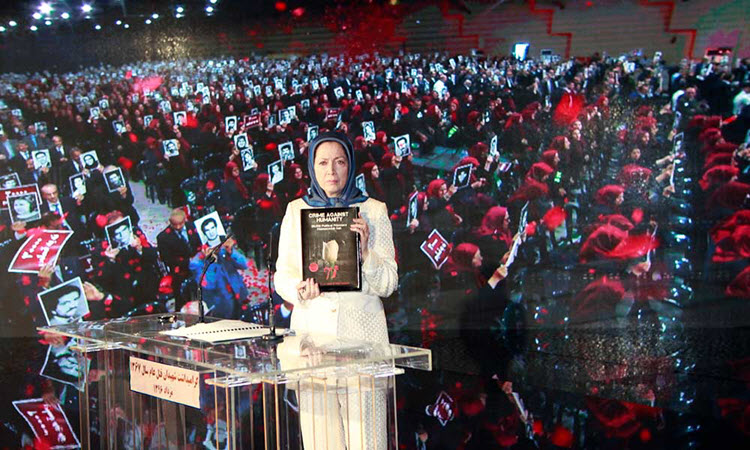 London, 21 Aug – The Iranian Resistance held a memorial on Sunday for the 30,000 victims of 1988 massacre of political prisoners, mostly members of the People’s Mojahedin Organization of Iran (MEK), who were slaughtered by the Iranian Regime during the 1988 massacre.

At the memorial, Mrs. Maryam Rajavi, President-elect of the National Council of Resistance of Iran called for justice for the victims and called upon the international community to try the perpetrators of the massacre for crimes against humanity in the International Criminal Court, citing the admission by several high-ranking members of the Iranian Regime as evidence of their crimes.

She said: “How the international community approaches this genocide and this crime against humanity is a litmus test of its adherence to the principles of human rights. The prosecution and punishment of the perpetrators and masterminds of the 1988 massacre are the inalienable rights of human society, the people of Iran, and the PMOI (MEK).”

The Iranian Regime has long tried to silence those looking for justice by imprisoning them, torturing them, and even, executing them. This cannot be ignored.

By contrast, the Regime has rewarded those who served on Death Commissions by giving them cushy jobs such as head of one of the biggest foundations in Iran (Ebrahim Raisi) and Justice Minister (Mostafa Pour-Mohammadi and Alireza Avaie).

Mariano Rabino, member of the foreign affairs and human rights committees of the Parliament of Italy, said: “Due to international pressure, Rouhani was compelled to replace Mostafa Pour-Mohammadi with Alireza Avaie, another member of the Death Committee, who was responsible for the murder of many individuals including scores who were juveniles. As previous speakers pointed out, our governments and the EU should give priority to human rights in its dealings with Iran. No realpolitik consideration or business interest should take precedence to human rights. All of us, all human rights advocates, and all those who seek freedom and democracy should urge the UN to provide a factual and documented report on the 1988 massacre. Khamenei, Rouhani and all the regime’s senior officials who were implicated in the 1988 massacre should be brought to justice before the international court in The Hague.”

Rajavi announced that the Iranian Resistance would be releasing a book, titled Crime against Humanity, which would name over 5,000 MEK martyrs who have been murdered by the Regime.

She said, “Owing to the valuable year-round activities of the Resistance’s network inside Iran, in addition to the names and addresses of the graves of the victims, we also have the names of 113 members of the Death Commissions in Tehran and other provinces, nearly all of whom hold key positions in the regime. We also have the names and particulars of 213 criminals who carried out the death decrees in 35 cities as well as information about the locations of several mass graves that had been previously hidden.”

Kerry Kennedy, daughter of the late Senator Robert Kennedy and President of the Robert F. Kennedy Human Rights Foundation, praised the Iranian Resistance for their commitment to human rights and pledged her support to them.

She said: “You are trying to bring back to Iran a government that is based on humanity, not on suffering and oppression, but of compassion and love for one another. And in that, all the world is with you. And I am proud to stand here with you, today. We are here today because we believe in freedom and we stand in solidarity with the people of Iran. We stand against the mullahs who have caused untold terror in your beloved country.”

Others speaking at the MEK memorial included; Senator Pietro Liuzzi, a member of the cultural and EU policy committees of the Italian Senate; Ingrid Betancourt, a former senator from Columbia; and Tahar Boumedra, former director of the Human Rights Office of UNAMI.

AFP: Russia will support a ban on shipments to...