Is Trump’s Decertification of Iran More Blustering or a Real Attempt at Change in Iran? 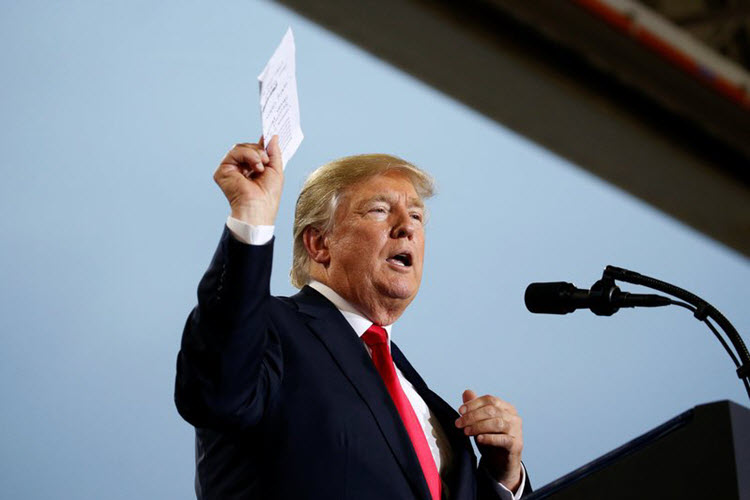 London, 16 Oct – Following Donald Trump’s decision to decertify the Iran nuclear deal he received much criticism from Western powers who ignored the real threat that the Iranian Regime posed.

Baria Alamuddin, the editor of the Media Services Syndicate and a foreign editor at Al-Hayat, wrote an op-ed for Arab News in which she assessed that the Iranian Regime’s nuclear programme may indeed be the least of our concerns at the moment.

She wrote: “Iran-backed militias such as Hezbollah in Lebanon, Al-Hashd Al-Shaabi in Iraq, the Houthis in Yemen and a plethora of paramilitaries in Syria are now deciding issues of war and peace in these states — on behalf of Tehran.”

Indeed, some of those Iranian proxy forces are currently threatening the Kurdish people in the Iraqi city of Kirkuk.

Alamuddin continued: “There is a refusal to recognize that since signing the 2015 deal, Iran’s regional posture has become exponentially more aggressive, largely through proxy forces that boast about aspiring to attack Western targets. European nations such as Germany, France and Italy are so enraptured by the economic dividends of re-engaging with Iran that they are blinded to the fact that the Islamic Republic is existentially hostile to their values and interests. Just hours after Britain called on Trump to uphold the nuclear deal, it emerged that Tehran had been behind a major cyber-attack against dozens of British MPs.”

Alamuddin said that this decision would show us what Trump is really made of.

She wrote: “Is Trump serious about getting tough with Tehran? Beyond the desire to undermine Obama’s legacy, will he settle for angry rhetoric and incremental tightening of sanctions, while casually tossing international consensus about the nuclear deal into confusion?… Will he settle for bluster and rhetoric, while ultimately allowing Tehran to become the unchallenged power in the Middle East? Or is he serious about a far-reaching and decisive strategy to contain and push back Iran?”

While Trump is correct about the dangers posed by keeping the nuclear deal in place without renegotiation, as assessed by Alamuddin and backed up by many national security experts, as it could lead to another North Korea situation in just a few years, so action must be taken.

Alamuddin wrote: “Sanctions must be just one strand of a multifaceted containment strategy: Countering Tehran’s espionage, money-laundering, propaganda and cyberspace capabilities; liaising with allies to obstruct the Revolutionary Guards’ illicit economic activities, including revenue-generating involvement in arms and narcotics smuggling.”

She continued: “The US Administration’s language on sanctions against the Revolutionary Guards appears to be deliberately ambiguous, falling short on clearly designating the entire IRGC as a terrorist entity. However, in any case, we must be clear that new sanctions are not a game-changer: There are few IRGC officials stupid enough still to have European bank accounts, or who would be significantly affected by travel bans. Just as Saddam Hussein’s regime made a fortune by monopolizing circumvention of the UN Oil-for-Food program, many measures against Iran simply enrich those Trump seeks to target.”

She advises targeting Iran’s investment in international proxies and mercenaries who are used as ‘cannon fodder’ and ending their control over other Middle Eastern states like Syria and Iraq.

She wrote: “Trump is blessed with senior officials like H.R. McMaster and James Mattis with decades of experience in grappling with Iranian meddling. Trump must use the vast resources of his presidency to consolidate international support behind a multi-faceted campaign against Tehran’s expansionist policies.”

AP: In what U.S. officials called a serious provocation,...

At an international conference to discuss “Islamic Fundamentalism, Roots,...