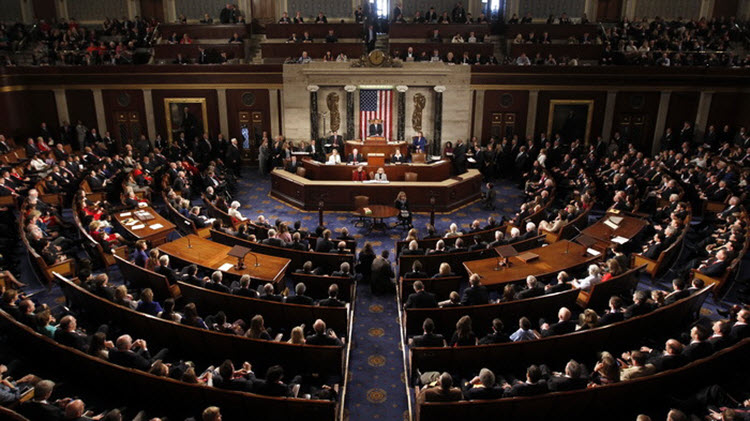 London, 27 Oct – According to Bloomberg’s report, the US House of Representatives passed new sanction bills this week that target Iran’s ballistic missile program and its support for Hezbollah.

The nearly unanimous vote of 423-2, displayed bi-partisan support from Congress against Iran — the first such, since US President Trump refused to certify Iran’s compliance with the terms of the nuclear deal, formally known as the Joint Comprehensive Plan of Action (JCPOA), earlier this month.

Trump has called for a tougher stance from Congress that may include renegotiating or pulling out of the JCPOA. However, this legislation fails to give Trump what he requested, which was junctures that would automatically trigger re-imposition of the sanctions that were eased under the nuclear deal unless Iran meets a list of US demands.

Last week, Supreme Leader Ayatollah Ali Khamenei said that, while Iran wouldn’t move first to abandon the nuclear deal, it “will tear it to pieces” if the US violates its side of the agreement. Additionally, Iranian officials have said there is no room to renegotiate the nuclear deal.

H.R. 1698, the bill that passed last Thursday, would expand previously imposed Iran sanctions, and require the administration to create an implementation plan. The bill would impose additional sanctions on individuals or entities that assist Iran in the development of ballistic missiles and other conventional weapons, but will not apply to any nuclear activity. Sanctions may include freezing US assets, denying entry into the US, barring imports and exports, restrictions from participating in federal contracts and imposing criminal or civil penalties.

H.R. 3329, passed on Wednesday, would require the administration to impose penalties on entities that support Hezbollah, who is considered by the US to be a terrorist organization. These sanctions would include financial institutions and foreign government agencies. Iran’s listing as a state sponsor of terrorism is partially based on its support of Hezbollah, according to the US State Department.

A second bill that was passed on Wednesday, H.R. 3342, would direct the president to impose economic sanctions on, and bar from entering the US, members of Hezbollah who have used human shields. The legislation outlines the way in which the administration would be required to identify and punish militants who have orchestrated the use of civilians as cover in armed conflicts.

A United Nations inspector said in a report issued on Wednesday that violations of human rights and oppression of dissidents, ethnic minorities and women in Iran “have continued in many areas and on a wide scale.”

Reuters: Iran is conducting final tests at its first...