The Iranian Resistance Welcomes the New US Iran Strategy 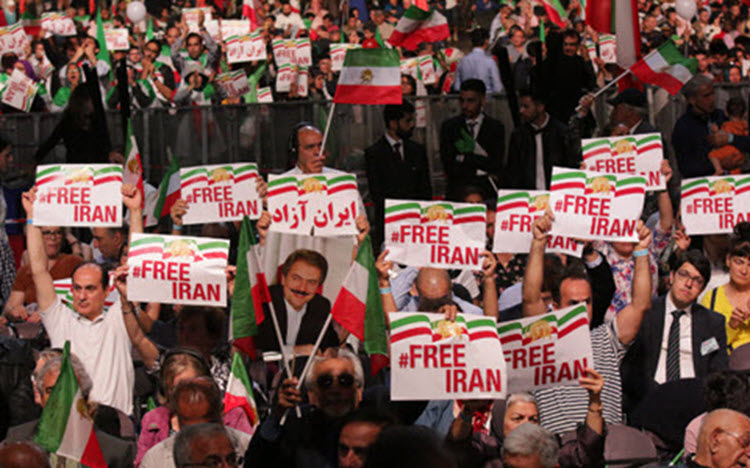 London, 28 Oct – On October 13th, President Trump announced the new US strategy towards Iran. The reaction to this strategy have been varied. Those who advocate the for continuing the JCPOA condemned it, claiming it will cause a loss of trust in America. Others believe the new strategy will serve both the interests of the US as well as the Iranian people.

Trump cited some of Iran’s activities over the past 38 years in his speech, “Beginning in 1979, agents of the Iranian regime illegally seized the U.S. embassy in Tehran and held more than 60 Americans hostage during the 444 days of the crisis. The Iranian-backed terrorist group Hezbollah twice bombed our embassy in Lebanon – once in 1983 and again in 1984. Another Iranian-supported bombing killed 241 Americans – service members they were, in their barracks in Beirut in 1983. In 1996, the regime directed another bombing of American military housing in Saudi Arabia, murdering 19 Americans in cold blood. Iranian proxies provided training to operatives who were later involved in al Qaeda’s bombing of the American embassies in Kenya, Tanzania, and two years later, killing 224 people, and wounding more than 4,000 others.”

Still, he did not discuss the details of those suppressive measures. Such measures have long been overlooked by the West. In his article for NewsBlaze, Keyvan Salami, an Iranian activist, gives these examples:

• Execution of over 120,000 dissidents since 1981, and more specifically the massacre of 30,000 political prisoners in summer of 1988. Those killed were mostly members and supporters of the main opposition, the People’s Mujahidin Organization of Iran (PMOI-MeK).

• Imprisonment, torture and execution of hundreds of thousands of Iranian people, including execution of pregnant women, execution of girls and boys under the age of 18, raping women before execution, …

• Implementing anti human, and anti-Islamic rules under the guise of Islamic sharia, such as amputation of arms and legs, gouging eyes, stoning to death and torturing people in public by flogging.

Salami adds, “In short, for the past 38 years the mullahs’ regime has been at war with the nations of Iran and the Middle East. The supreme leaders’ special army, the Islamic Revolutionary Guard Corps (IRGC), has been the main force behind this inhumane war. In the meantime, the West, through its appeasement policy, was siding with the regime in this war.”

In the past, the West hoped to engage with Iran, but the new administration seems to believe that rapprochement has only emboldened this regime.

Trump’s new Iran strategy, and the designation of the IRGC as a terrorist organization, provoked a response from Iranian President Hassan Rouhani and Foreign Minister Mohammad Javad Zarif. They announced they are all IRGC.

The Iranian people and their representatives, the Iranian Resistance, welcomed the new US strategy. Mrs. Maryam Rajavi, President-elect of the National Council of Resistance of Iran (NCRI), said Washington should “condemn the IRGC’s gross violations of human rights” in Iran and “deny the Iranian regime and especially the Islamic Revolutionary Guard Corps (IRGC) funding for its malign activities, and oppose IRGC activities that extort the wealth of the Iranian people.”

Mrs. Rajavi added, “A firm US policy vis-à-vis Iran is long overdue.” She said that the ultimate solution is the overthrow of the regime and establishment of freedom and democracy in Iran by the Iranian people and Resistance.

The international community should now recognize the aspirations of the Iranian people and stand with the people of Iran and their legitimate right for regime change, according to the president-elect of the NCRI.