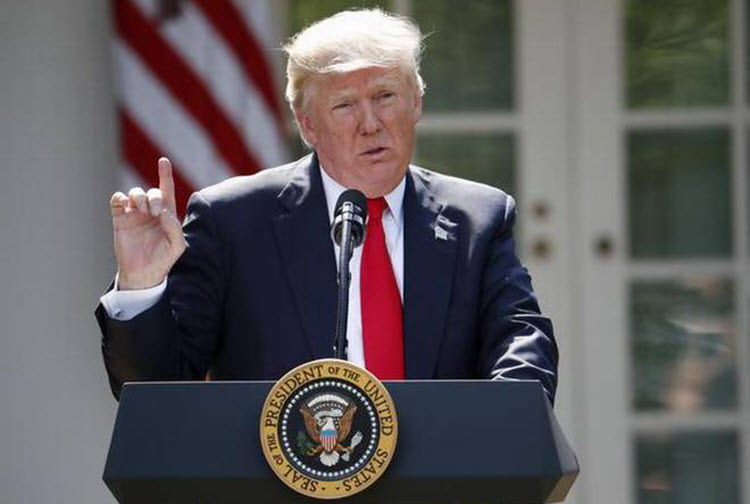 London, 18 Jan – Donald Trump reopened the debate on the Iranian nuclear deal, last week, when he announced that he would waive the sanctions until May, but after that something would need to change.

As of yet, Trump isn’t pulling the US out of the 2015 pact between six world powers and Iran, but he is demanding that Congress produce legislation to fix the deal and ensure that if the US remains a party to it, Iran will not be able to create a nuclear weapon.

• recognition that long-range missile and nuclear weapons programs are inseparable, which would mean Iran’s testing of ballistic missiles would be subject to sanctions

Trump said that if the other signatories to the deal (Britain, France, Germany, Russia, and China) failed to also implement these changes, then he would pull the US out.

Of course, the Iranian Regime has stated that they won’t accept any changes to the current deal and that it is “non-negotiable”.

However, it is worth noting that without this deal, Iran would be completely cut off from international sanctions relief and their economy would tank. They are incredibly unlikely to risk that, especially with widespread current protests.

Aside from Trump, there is other shocking news about the Iran nuclear deal, which has been making the news.

In an attempt to keep the negotiations on track and prevent the Iranian Regime from walking away from the deal, the previous administration shut down a US government task force- called Operation Cassandra- that was targeting a $1 billion a year drug smuggling ring run by Iran’s proxy group Hezbollah.

Cassandra, headed by the Drug Enforcement Administration, worked for eight years and gathered a mountain of evidence but were shut down to appease the Iranian Regime.

Attorney General Jeff Sessions has announced that he will develop a new task force to build on the work of Operation Cassandra and rumours about possible prosecutions of high-level officials are circulating.

Some see this development as akin to the Iran-Contra scandal under Ronald Reagan, where some officials sold weapons to Iran despite an arms embargo in order to fund the Contras in Nicaragua. Some officials were convicted, but most convictions were on appeal or vacated by presidential pardons.

The Iranian regime is intensely busy hurting the people...