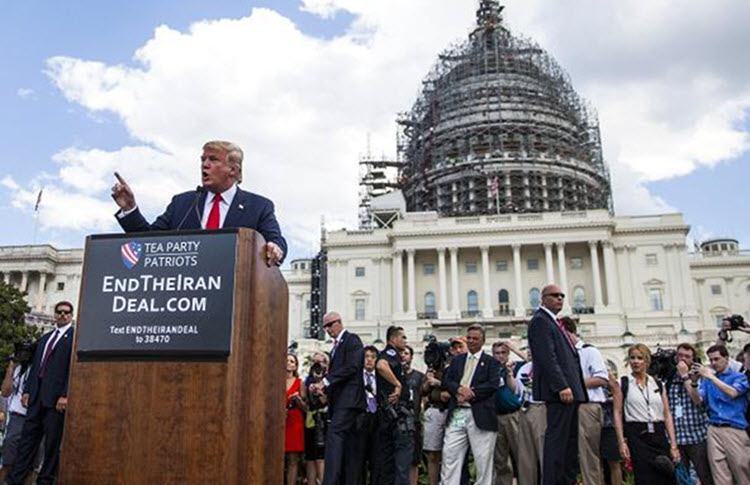 London, 30 Mar – Donald Trump has been threatening to tear up the 2015 Iranian nuclear deal since the campaign trail, but so far he’s been prevented from doing so by high-ranking cabinet officials.

This will not be the case for much longer, as political consultants the Eurasia Group have predicted that the agreement, formerly known as the Joint Comprehensive Plan of Action (JCPOA), is unlikely “to survive President Donald Trump’s first term in office”, as revealed by their chair Cliff Kupchan on Wednesday.

The deal agreed by the US, the UK, Russia, France, China, Germany, and Iran was supposed to limit Tehran’s nuclear program in exchange for sanctions relief, but there is vast evidence – cited by Trump – that Iran has not been complying.

Even if Iran was complying, Trump also raised concerned about the so-called “sunset clauses” that allows restrictions to expire and mean that Iran could legally have nuclear weapons within a decade, as well as the clause that allows Iran to enrich uranium over and above the levels needed for commercial power production.

Trump wanted the flaws in the deal fixed and so gave Congress and the European signatories to the deal, a deadline of May 12 to fix the deal or he would pull the US out.

He also wanted to ban Iran from testing ballistic missiles and give atomic energy inspectors unlimited access to any Iranian military site.

This deadline is fast approaching and as of yet, no one has made any attempt to fix these flaws, so we may soon see the deal fall.

This is especially likely now that Trump has appointed war hawks like John Bolton as national security advisor and Mike Pompeo as secretary of state. Both men are opposed to Iran and the nuclear deal, with Pompeo describing Iran as a “thuggish police state” and Bolton’s clear support of regime change in Iran.

Even if Trump doesn’t pull out immediately, Kupchan noted that the US would likely impose secondary sanctions to prevent other countries from doing business with Iran.

This, Kupchan believes, will cause Iran to increase its aggression in the Middle East, but it’s important to note that Iranian aggression hasn’t been stalled by the deal (see: Syria, Lebanon, Iraq, or Yemen).

All in all, if the flaws in the nuclear deal aren’t fixed, Trump should pull out on May 12. This move will put a strain on the Iranian economy and bring about regime change in Iran much more quickly.