Trump: Iran’s Threats Can Come Back to Bite Them 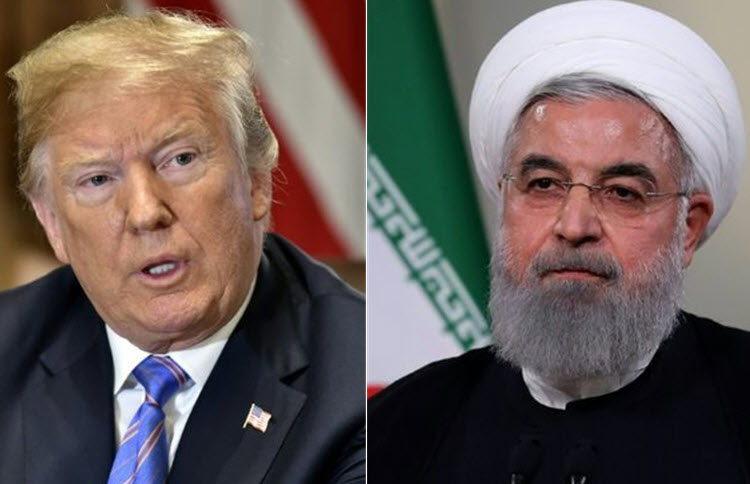 Donald Trump tweeted that Iran should be “careful with threats” as they can “come back to bite you” in response to Iran’s announcement that it had already breached the nuclear deal’s low-enriched uranium stockpile limits and was planning to violate the uranium purity level.

Trump wrote on Wednesday: “Iran has just issued a New Warning. [Iranian President Hassan] Rouhani says that they will Enrich Uranium to ‘any amount we want’ if there is no new Nuclear Deal. Be careful with the threats, Iran. They can come back to bite you like nobody has been bitten before!” 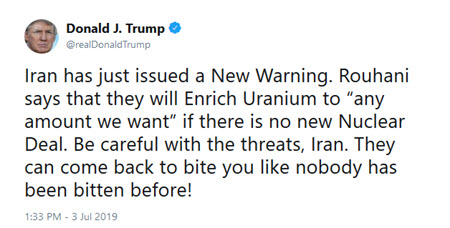 And he is far from the only one criticising Iran for this. France said that Iran would “gain nothing” by leaving the deal and said, “challenging the agreement would only increase tensions”, while the foreign ministers of Britain, France, Germany and the EU said they were “extremely concerned” and urged Iran to reverse its decision in a statement. Israel has also urged Europe to impose sanctions on Iran for abandoning its nuclear commitments.

Rouhani said: “Our level of enrichment will no longer be at 3.67%. We put aside this commitment and will increase enrichment as we please.”

This came just two days after Trump warned that Iran is “playing with fire” after its initial violation of the nuclear deal.

Iran has so far increased its stockpiles of low-enriched uranium above 300 kilograms, threatened to exceed the 3.67% purity of enriched uranium to 20% on Sunday July 7, and Iranian President Hassan Rouhani even threatened to resume construction of the Arak heavy water reactor to the point where “according to [the international community], is dangerous and can produce plutonium”. All of this closes the timeframe for Iran to produce a nuclear bomb and makes the international community, particularly those in the Middle East nervous.

Of course, Iran claims it’s not violating the deal, but this is contrary to the views of the other signatories – Britain, China, France, Germany and Russia –and the UN nuclear watchdog. Iran’s actions are part of a campaign to pressure the other parties to help Iran evade US sanctions.

The US withdrew from the deal in May 2018, citing Iranian noncompliance, and began reimposing sanctions on Tehran in August. Since then, tensions have only risen between the two countries, particularly after sanctions on Iranian oil were imposed and Iran made various threats to shipping in the Gulf, which culminated on six attacks on tankers in the region in two months.

AFP: An Iranian film-maker and outspoken critic of his...

Reuters: Iran denied knowledge on Wednesday of any leaflets...