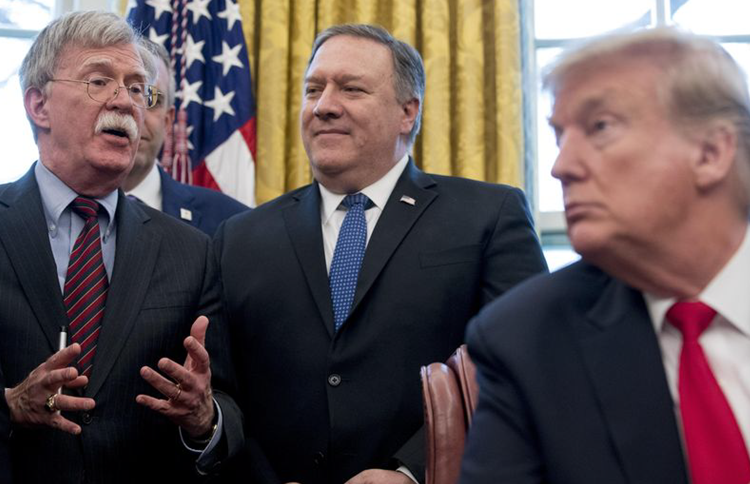 The United States would only lift its sanctions on Iran after reaching a comprehensive deal on its nuclear program, according to US National Security Advisor John Bolton in an interview with Radio Free Europe on Tuesday.

These comments came just one day after US President Donald Trump said that he would be prepared to talk with Iranian President Hassan Rouhani, something that has not happened since the 1979 revolution. Rouhani responded that a face-to-face meeting between him and his US counterpart could only happen after US sanctions were lifted; a notion that Bolton firmly rejected.

Bolton said: “The idea that Iran would receive some tangible economic benefit merely for stopping doing things it should not have been doing in the first place is just a non-starter. If there is a comprehensive deal, then, of course, the sanctions will come off at that point. When the regime in Iran is ready to talk about that, then there will be a meeting.”

He stressed that the US position on Iran has not changed and would not change if Trump met with Rouhani.

While Secretary of State Mike Pompeo confirmed that the US is still committed to preventing a nuclear Iran, saying that the US wants to “ensure that the world’s largest state sponsor of terror” doesn’t obtain nuclear weapons.

Pompeo said that when Tehran changes its stance, “there’ll be a new solution, there’ll be a new understanding and set of agreements. We hope that that comes sooner rather than later. It would be in the best interests of the world for that to happen”.

Last May, the Trump administration pulled out of Iran nuclear deal, formally known as the Joint Comprehensive Plan of Action, citing Iranian noncompliance. The US reimposed sanctions that have crippled the Iranian economy, particularly affecting its oil exports.

The deal, signed in 2015 by the US, Britain, France, Germany, China, and Russia, was supposed to curb Iran’s nuclear ability, but actually allowed Iran to produce nuclear weapons in just a few years and failed to address its ballistic missiles program.

AFP: The UN atomic agency has cancelled a planned...