The Fateh Nuclear Submarine, A Camouflage for An Iranian Nuclear Bomb 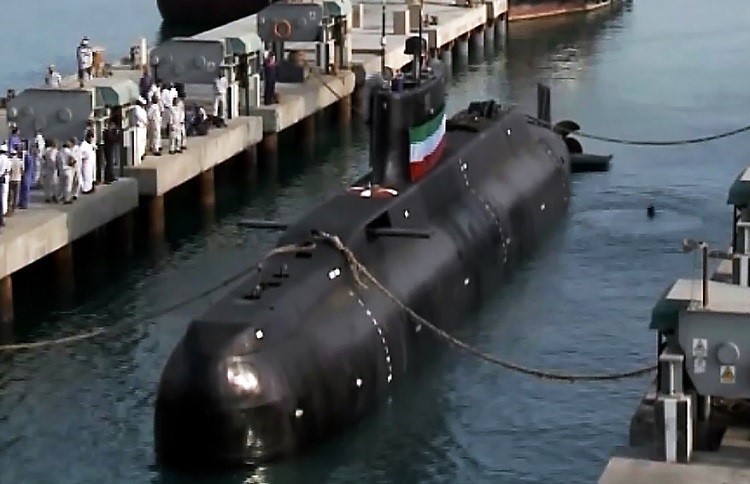 Iran’s regime has claimed that it is building an atomic submarine called the Fateh (Conqueror), which is a sign of the country’s progress and growth in line with Supreme Leader Ali Khamenei’s announced strategy of the “Year of a leap in production.” But the regime’s propaganda move is a camouflage smokescreen to cover up its real goal of building an atomic bomb.

Hossein Khanzadi, Commander of the Navy, on 16 April announced the start of the production of this submarine. He immediately added: “The Islamic Republic’s position toward nuclear energy is clear and transparent and the supreme leader Ali Khamenei frequently insisted on it. The nuclear programs’ officials and the authorities all know the framework and take steps in this framework.”

Khanzadi’s reason for raising the issue of transparency on nuclear energy is to answer the following questions in advance. The most important question of the regime’s nuclear activities is, what is the purpose of the regime’s resumption, and why is it pursuing it with such intensity?

In June 2006, China, Russia, and the United States joined the three EU-3 countries forming the P5+1, which had been negotiating with Iran since 2003, to offer another proposal for comprehensive negotiations with Iran.

A round of the talks between Iran and the P5+1, chaired by EU High Representative Catherine Ashton, was held in the Kazak city of Almaty on 26–27 February 2013. The two sides agreed to meet again in the city on 5–6 April to continue the talks after holding expert-level talks in the Turkish city of Istanbul on 17–18 March 2013.

In a further meeting of the P5+1 in Geneva on 16 October 2013, Iran stated that it may allow unannounced visits to its nuclear sites as a “last step” in a proposal to resolve differences with the West. Lowering uranium enrichment levels could also be part of a final deal, according to an Iranian official.

On 24 November 2013, an interim agreement was reached between the E3/EU+3 (P5+1 countries and the EU) and Iran in Geneva, Switzerland. It was expected to lead to a six-month freeze and partial rollback of portions of Iran’s nuclear program in exchange for decreased economic sanctions on Iran, as the countries work towards a long-term agreement.

The regime was forced to go to the negotiation table and to sign the agreement in a situation whereby sanctions were in place and the possibility of a US-led war and widespread attacks had become quite serious.

With the arrival of US President Donald Trump and the de facto end of the JCPOA (the Joint Comprehensive Plan of Action), sanctions were lifted to the maximum, and conditions were set for their abolition, each of which for the regime was like drinking from a poison chalice.

In retaliation against the United States, Hassan Rouhani’s government began taking steps in May 2019 to violate its nuclear agreement commitments. It also announced in mid of January 2020 that it had taken the last step and would not accept any further restrictions on its enrichment and nuclear program.

Within a year and three months of the regime’s resumption of uranium enrichment and the installation of 8th and 9th generation centrifuges, the regime has not yet allowed inspectors from the International Atomic Energy Agency (IAEA) to visit suspicious sites they wanted to see.

The IAEA report said Iran has dramatically increased the number of centrifuges it uses to produce the nuclear fuel, bringing about 1,000 of the machines back into use in recent months, including at the Fordow underground enrichment facility. (CNN, 4 March 2020)

Iran sought an atomic bomb after the war with Iraq

From the first day of his tenure, Khomeini (the regime’s founder), who was in charge of forming the Shiite Caliphate Empire, during the eight-year Iran-Iran War, chanted “Conquest of Jerusalem through the Karbala,” and pursued the stability of his young regime. With the end of the war and the loss of $1 trillion in damage to the country’s economy and the destruction of the country’s infrastructure, the regime’s leaders, led by Ali Akbar Hashemi Rafsanjani, saw the only way for their regime’s survival was to acquire an atomic bomb and infiltrate in the countries of the region.

With this strategy in place, the regime has sought to build an atomic bomb since 1990, spending billions of dollars on oil revenues. To this end, Abdul Qadir Khan, the father of the Pakistani nuclear bomb, was secretly recruited. And parallel to this activity the regime started to advance its missile treasury.

The regime’s policy of deception in advancing these projects was to do its work in the guise of legitimate subjects. The construction of the Tehran metro was one of the coverings that the regime was able to purchase tunnel drilling machines from the western countries and use them to build tunnels under the mountains to keep its missiles.

That is why the construction of the Tehran metro took almost 10 years. Because the main machinery was used to dig the missile tunnel.

The regime’s nuclear project continued in secret for 18 years, until the Iranian opposition (MEK/PMOI) exposed it in 2002 while exposing Natanz’s enrichment facilities and Arak’s heavy water.

Although the regime tried hard to deny it, the revelations were so clear that the regime eventually accepted it. During the presidencies of Mohammad Khatami and Mahmoud Ahmadinejad, there were serious loopholes in the functioning of the International Atomic Energy Agency due to the policy of appeasement.

Prior to the signing of the JCPOA agreement, international experts estimated that the Iranian regime was six months to a year away from building a nuclear bomb. Among the regime’s other needs in the nuclear power process was the possession of long-range missiles capable of carrying nuclear warheads. Until last year, the regime was able to use Chinese and North Korean missiles, with the help of engineers and their specialists, to upgrade the Shahab missile and bring its range to Europe’s borders.

The regime’s long-range missiles have so far been deprived of a special warhead capable of carrying a nuclear warhead. But they worked hard to build it. In December last year, a spokesman for the Revolutionary Guards Air Force said Iran had been able to build and test its warheads with ballistic missiles.

If the regime’s missile technology with a nuclear warhead is successful, Khamenei has only one step left to be equipped with a nuclear weapon. About three months have passed since mid-December 2019 when the regime took the last step to reduce its commitments.

During this time, the regime has done its utmost to enrich uranium with a high percentage, declaring that it will not accept any ceiling for the enrichment and will produce whatever they want and according to their needs.

One of the regime’s tricks is using the global crisis for its benefits, whether its influences in other countries through the Iraq war or the coronavirus pandemic to force the countries especially the US to lift the sanctions and remove the regime’s finance deadlock under the alibi of humanitarian aids, but to financing its proxy groups and its missile and nuclear projects. Or using the coronavirus to involve the people to prevent any further protests.

So, if today the regime is raising the issue of building a nuclear-powered submarine, it is not more than a hoax, and Khamenei is trying to equip and prepare his ballistic missiles with nuclear warheads.

Iran: Who Will Pull the Trigger?

Reuters: Iran wants major amendments within the framework of...

Tehran a step away from nukes

AP: Iran is closing in on the production of...