As ugly as it gets

New York Times: I confess that when I first saw the May 17 picture of Iran’s president, Mahmoud Ahmadinejad, joining his Brazilian counterpart, Luiz Inácio Lula da Silva, and the Turkish prime minister, Recep Tayyip Erdogan, with raised arms — after their signing of a putative deal to defuse the crisis over Iran’s nuclear weapons program — all I could think of was: Is there anything uglier than watching democrats sell out other democrats to a Holocaust-denying, vote-stealing Iranian thug just to tweak the U.S. and show that they, too, can play at the big power table? 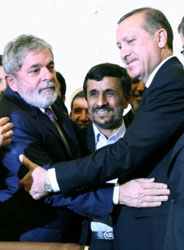 I confess that when I first saw the May 17 picture of Iran’s president, Mahmoud Ahmadinejad, joining his Brazilian counterpart, Luiz Inácio Lula da Silva, and the Turkish prime minister, Recep Tayyip Erdogan, with raised arms — after their signing of a putative deal to defuse the crisis over Iran’s nuclear weapons program — all I could think of was: Is there anything uglier than watching democrats sell out other democrats to a Holocaust-denying, vote-stealing Iranian thug just to tweak the U.S. and show that they, too, can play at the big power table?

No, that’s about as ugly as it gets.

“For years, nonaligned and developing countries have faulted America for cynically pursuing its own interests without regard for human rights,” observed Karim Sadjadpour of the Carnegie Endowment. “As Turkey and Brazil aspire to play on the global stage, they’re going to face the same criticisms they once doled out. Lula and Erdogan’s visit to Iran came just days after Iran executed five political prisoners who were tortured into confessions. They warmly embraced Ahmadinejad as their brother, but didn’t mention a word about human rights. There seems to be a mistaken assumption that the Palestinians are the only people that seek justice in the Middle East, and if you just invoke their cause you can coddle the likes of Ahmadinejad.”

Turkey and Brazil are both nascent democracies that have overcome their own histories of military rule. For their leaders to embrace and strengthen an Iranian president who uses his army and police to crush and kill Iranian democrats — people seeking the same freedom of speech and political choice that Turks and Brazilians now enjoy — is shameful.

“Lula is a political giant, but morally he has been a deep disappointment,” said Moisés Naím, editor in chief of Foreign Policy magazine and a former trade minister in Venezuela.

Lula, Naím noted, “has supported the thwarting of democracy across Latin America.” He regularly praises Venezuela’s strongman Hugo Chávez and Fidel Castro, the Cuban dictator — and now Ahmadinejad — while denouncing Colombia, one of the great democratic success stories, because it let U.S. planes use Colombian airfields to fight narco-traffickers. “Lula has been great for Brazil but terrible for his democratic neighbors,” said Naím. Lula, who rose to prominence as a progressive labor leader in Brazil, has turned his back on the violently repressed labor leaders of Iran.

Sure, had Brazil and Turkey actually persuaded the Iranians to verifiably end their whole suspected nuclear weapons program, America would have endorsed it. But that is not what happened.

Iran today has about 4,850 pounds of low-enriched uranium. Under the May 17 deal, it has supposedly agreed to send some 2,640 pounds from its stockpile to Turkey for conversion into the type of nuclear fuel needed to power Tehran’s medical reactor — a fuel that cannot be used for a bomb. But that would still leave Iran with a roughly 2,200-pound uranium stockpile, which it still refuses to put under international inspection and is free to augment and continue to reprocess to the higher levels needed for a bomb. Experts say it would only take months for Iran to again amass sufficient quantity for a nuclear weapon.

So what this deal really does is what Iran wanted it to do: weaken the global coalition to pressure Iran to open its nuclear facilities to U.N. inspectors, and, as a special bonus, legitimize Ahmadinejad on the anniversary of his crushing the Iranian democracy movement that was demanding a recount of Iran’s tainted June 2009 elections.

In my view, the “Green Revolution” in Iran is the most important, self-generated, democracy movement to appear in the Middle East in decades. It has been suppressed, but it is not going away, and, ultimately, its success — not any nuclear deal with the Iranian clerics — is the only sustainable source of security and stability. We have spent far too little time and energy nurturing that democratic trend and far too much chasing a nuclear deal.

As Abbas Milani, an Iran expert at Stanford University, put it to me: “The only long-term solution to the impasse is for a more democratic, responsible, transparent regime in Tehran. It has been, in my view, a great con game successfully played by the clerical regime to make the nuclear issue the almost sole focal point of its relations with the U.S. and the West. The West should have always followed a two-track policy: earnest negotiations on the nuclear issue and no less earnest discussion on the issues of human rights and democracy in Iran.”

I’d prefer that Iran never get a bomb. The world would be much safer without more nukes, especially in the Middle East. But if Iran does go nuclear, it makes a huge difference whether a democratic Iran has its finger on the trigger or this current murderous clerical dictatorship. Anyone working to delay that and to foster real democracy in Iran is on the side of the angels. Anyone who enables this tyrannical regime and gives cover for its nuclear mischief will one day have to answer to the Iranian people.