Reuters: Could the administration of President Barack Obama hasten the downfall of Iran’s government by taking an opposition group off the U.S. list of terrorist organizations? 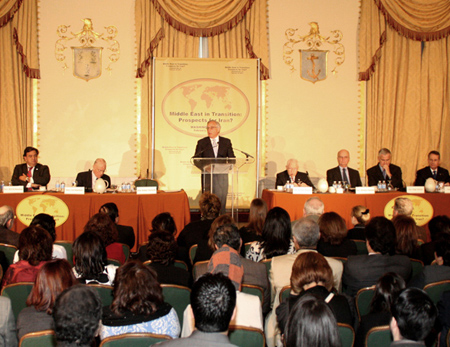 WASHINGTON, Feb 25 (Reuters) – Could the administration of President Barack Obama hasten the downfall of Iran’s government by taking an opposition group off the U.S. list of terrorist organizations? To hear a growing roster of influential former government officials tell it, the answer is yes.

The MEK was placed on the terrorist list in 1997, a move the Clinton administration hoped would help open a dialogue with Iran, and since then has been waging a protracted legal battle to have the designation removed. Britain and the European Union took the group off their terrorist lists in 2008 and 2009 respectively after court rulings that found no evidence of terrorist actions after the MEK renounced violence in 2001.

In Washington, initial support for “de-listing” came largely from the ranks of conservatives and neo-conservatives but it has been spreading across the aisle and the addition of a newcomer of impeccable standing with the Obama administration could herald a policy change not only on the MEK but also on dealing with Tehran.

The newcomer is Lee Hamilton, an informal senior advisor to President Obama, who served as a Democratic congressman for 34 years and was co-chairman of the commission that investigated the events leading to the September 11, 2001 attacks on Washington and New York.

“This is a big deal,” Flynt Leverett and Hillary Mann Leverett, two prominent experts on Iran, wrote on their blog. “We believe that Hamilton’s involvement increases the chances that the Obama administration will eventually start supporting the MEK as the cutting edge for a new U.S. regime change strategy towards Iran.” The Leveretts think such a strategy would be counter-productive.

But speakers at the February 19 conference in Washington where Hamilton made his debut as an MEK supporter thought otherwise. Addressing some 400 Iranian-Americans in a Washington hotel, retired General Peter Pace said: “Some folks said to me  if the United States government took the MEK off the terrorist list it would be a signal to the Iranian regime that we changed from a desire to see changes in regime behavior to a desire to see changes in regime. Sounds good to me.”

The Obama administration’s policy is not regime change but the use of sanctions and multi-national negotiations to persuade the government in Tehran to drop its nuclear ambitions. So far, that has been unsuccessful. Two rounds of talks between Iran, the U.S., China, Russia, France, Britain and Germany in January ended without progress and did not even yield agreement on a date for more talks.

NO POLICY CHANGE BUT SHARPER RHETORIC
That did not change Washington’s “no regime change” stand. What has changed is the tone of public American statements on Iran since a wave of mass protests swept away the authoritarian rulers of Tunisia and Egypt and forced the governments of Jordan, Bahrain, Yemen, Algeria and Saudi Arabia to announce reforms. In contrast, Iran responded to mass demonstrations with violent crackdowns.

Secretary of State Hillary Clinton declared that the U.S.  “very clearly and directly support the aspirations of the people who are in the streets” of Iranian cities agitating for a democratic opening as they did in 2009, when Washington stayed silent.

Like the U.S., Iran labels the MEK a terrorist organization and has dealt particularly harshly with Iranians suspected of membership or sympathies. In the view of many of its American supporters, the U.S. terrorist label has weakened internal support for the MEK. How much support there is for the organization is a matter of dispute among Iran watchers, many of whom consider it insignificant.

At last week’s Washington conference, however, speaker after speaker described it as a major force, feared and hated by the Iranian government. General Shelton called it “the best organized resistance group.” Dell Daley, the State Department’s counter-terrorism chief until he retired in 2009, said the MEK was “the best instrument of power to get inside the Iran mullahs and unseat them.”

The decision to give legitimacy, or not, to the group is up to Hillary Clinton. Last July, a federal appeals court in Washington instructed the Department of State to review the terrorist designation, in language that suggested that it should be revoked. Court procedures gave her until June to decide.

The Guardian: Iran is secretly forging ties with al-Qaida...

Destruction of Villages and the Lives of Iranian Farmers

By Jubin Katiraie With the negative growth of household...