Daily Mail: The Iranian regime continues to be the focus of much discussion and debate, yet little attention is being paid to the internal dynamics of Iran; particularly its brutal crackdown on dissidents and its appalling human rights record. The Daily Mail

By Baroness Muriel Turner Of Camden 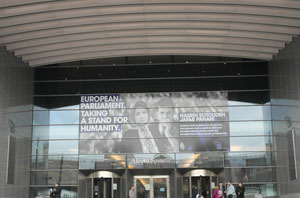 The Iranian regime continues to be the focus of much discussion and debate, yet little attention is being paid to the internal dynamics of Iran; particularly its brutal crackdown on dissidents and its appalling human rights record.

For Iranian activists on the ground, it has been a struggle to have their voices heard. It took the shocking murder of Iranian blogger Sattar Beheshti for the world to pay attention to the crimes of the Islamic Republic. Beheshti was detained by the Iranian cyber police unit, and died while in custody, reportedly as a result of extensive torture. Beheshti’s death shows the reality that many Iranians face when speaking out against the regime.

The case of Iranian human rights lawyer Nasrin Sotoudeh, is also worth noting. Sotoudeh has been incarcerated since 2010, and is currently on hunger strike to protest the conditions of her imprisonment. As an attorney she defended a number of dissidents accused of crimes against the state, before she herself was arrested and charged. She recently was awarded the European Parliament’s Sakharov prize for human rights and freedom of thought, but remains incarcerated and cut off from the outside world.

Iran has pursued an iron fist policy towards dissidents, in the hopes of quelling domestic unrest in the face of hyperinflation, faltering economy and growing anti-regime sentiments. To date, the regime has reported 260 executions in Iran, but the real figures are likely to be higher, as the regime continues to execute many in secret.

The use of public executions is a clear tactic to terrorise the domestic population, and the arbitrary judicial process applied to political prisoners is a clear indication of the regime’s desperation to maintain a climate of fear and repression in Iran. A UN report on Iranian executions by a special rapporteur on the human rights, situation in Iran, stated: ‘A large number of those sentenced to death were convicted in the absence of fair trial standards.’

The case of Gholamreza Khosravi illustrates the arbitrary nature of the regime’s judiciary, and its mistreatment of political prisoners.

Khosravi was arrested in 2008 by the Ministry of Intelligence and given a 6-year prison term for allegedly providing support to the People’s Mojahedin Organization of Iran (PMOI/MEK) – the largest Iranian opposition organisation.

During this period Khosravi was reportedly subject to torture and extreme duress in solitary confinement, for a period of forty months.

Khosravi was denied due process or any semblance of a fair trial, while being subjected to the most brutal forms of torture and isolation while in custody.

Following two retrials, Khosravi was sentenced to death after the conviction of a fresh charge of ‘enmity against God’ (moharebeh), for his alleged ties to the PMOI. He remains on death row and is facing his impending execution.

Since 2009, the majority of political prisoners executed by the regime have been affiliated with the PMOI, as the regime fears the organisation’s capacity to foment unrest and organise protests.

Actually, since the regime began its reign of terror in 1979, tens of thousands of PMOI members have been arrested, tortured and executed in Iran.

Last week the U.N. General Assembly’s Third Committee condemned Iran for widespread human rights abuses, citing ‘continuing alarming high frequency of the carrying-out of the death penalty (in Iran) in the absence of internationally recognised safeguards, including an increase in the number of public executions.’

It is time for the world to look beyond Iran’s nuclear program, and the hateful rhetoric of the regime and recognise the plight of the Iranian people and their struggle for freedom against one of the most repressive regimes in the world.

Actually as Mrs Maryam Rajavi, the leader of Iranian resistance underlined at a time when the Iranian regime, in facing growing internal and international crises and isolations, is intensifying suppression, torture and murder to unprecedented levels, mere adoption of censure resolution does not suffice.

The clerical regime should be held accountable and should be isolated from the international community.

It is time to refer this regime’s human rights record to the UN Security Council, to implement comprehensive sanctions against the regime and to put its leaders on trial.

Such moves will send a strong and effective message to the ruling religious fascism on the one hand and to its victims and to Iranian people on the other that the international community has put an end to silence and inaction vis-à-vis this dictatorship.

For those who spend their days and nights in a prison cell, their only hope is that their cries for freedom reach the ears of the international community.