Sydney Morning Herald: Robertson, a QC and probably the world’s best-known human rights lawyer, is now 66. He has lived most of his adult life in London, but was born in Australia. He says Iran’s nuclear ambitions are by far the biggest threat to world security because they will trigger a new arms race. 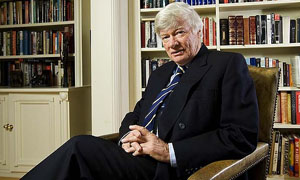 Geoffrey Robertson thinks he might owe his existence to the nuclear bombing of Hiroshima. At the time his father, an Australian fighter pilot, was to be part of the Allied invasion of Japan.

”He was due to report to naval headquarters on the very day that news of Hirohito’s surrender crackled over the wireless,” Robertson writes in his new book. ”Instead of reporting for duty, he telephoned the women’s air force corporal he had taken out in Townsville, and proposed.”

It was the mushroom cloud over Hiroshima that gave the emperor his excuse to surrender; without it, his father might well have been one of hundreds of thousands more soldiers to die in the conflict, Robertson says.

That knowledge has always tempered his view of nuclear weapons, which he did not regard as an unmitigated evil. But in his new book, Mullahs Without Mercy: Human Rights and Nuclear Weapons, the international human rights lawyer takes a tough stand. He says it is time the world – and its law – named the building and use of the bomb as a human rights atrocity, and set up systems to prevent it falling into the hands of ”malevolent regimes which seek to gird their loins for Armageddon”.
Advertisement

To wit, Iran. And Egypt and Syria and Libya. But mostly Iran, which has a history of ”appalling criminality”, including massacres of political prisoners. Its nuclear ambitions are by far and away the biggest threat to world security because they will trigger a new arms race, he says.

Robertson argues it is Iran’s progress towards nuclear weapons that has spurred Israel into its bombing of Hamas; Israel is clearing out Hamas’s missiles because it wants to bomb Iran in early 2013, ”once it achieves ‘nuclear capability’, which [Israel] confuses with nuclear culpability”.

Robertson, a QC and probably the world’s best-known human rights lawyer, is now 66. He has lived most of his adult life in London, but was born in Australia.

He speaks in the rich, plummy tones of an English gentleman. Private Eye accused him of having had ”a vowel transplant”; a philologist once said he spoke like an Etonian in the age of Queen Victoria. Robertson says he talked like that long before he studied as a Rhodes Scholar at Oxford: ”I didn’t speak at all until I was five, and then came out with the inflections of ABC announcers.”

Not bad for a graduate of Epping Boys High School in Sydney.

Robertson is popularly known in Australia for his ABC TV series Hypotheticals, in which he hosted debates on topical issues using the barrister’s verbal thrust and parry, often spearing the heart of the question, and sometimes panellists along with it. It was during one of these episodes in 1988 he met Sydney author Kathy Lette. He and Lette, a wise-cracking queen of chick-lit, married in 1990.

While Lette writes humorously about the personal side of life – froth with a feminist bite – Robertson’s work has been exposing and fighting the worst in human nature, the systematic abuse of the vulnerable.

It began with Aborigines in Australia; a theme continued when he won a landmark 2007 suit to have the remains of Tasmanian Aborigines returned from the British Natural History Museum.

He spent five years as president of a special court into war atrocities in Sierra Leone that indicted the former president, Charles Taylor.

He has acted for high-profile clients including WikiLeaks leader Julian Assange, author Salman Rushdie, who attracted a fatwah for his book Satanic Verses, and represents the jailed former president of Ukraine, Yulia Tymoshenko.

Robertson’s books include Crimes Against Humanity – the latest edition required 300 more pages than the one before it, he points out – and The Case Against The Pope, in which he used legal principles to argue that the Vatican should be treated as a ”rogue state” because of its shielding of paedophile priests. ”We must view child abuse as a crime against humanity when it is done on that industrial scale level,” he says.

So, why a book on nuclear weapons now? Hasn’t the threat been with us since Hiroshima and Nagasaki?

Yes, he says, but for decades after it was largely a stable two-party threat, with the doctrine of ”mutually assured destruction” staying the trigger fingers of US and Soviet leaders. Later, the ”big five” nations with nuclear weapons were all at a level of development where leaders had too much to lose to risk using it: ”Wives and children and retirement plans.”

Now unstable nations with aggressive, authoritarian regimes have nuclear ambitions. ”We haven’t had an explosion since Nagasaki, so everyone is very complacent,” he says. ”But we are probably about to fight a war to stop Iran [getting the bomb], and we don’t yet realise that this is Pandora’s Box. There’s nothing to stop any number of countries from reaching for nuclear weapons.”

Robertson points out Saddam Hussein used Scud missiles against Israel during the Gulf War in 1990, even though Israel was not one of the combatants: ”If he had had nuclear weapons to shoot at Israel he probably would have done so … You can imagine how much more difficult Syria would be if Assad had the bomb, or Libya if Gaddafi had had it. If he had kept building it, he would have had one by 2010, and he would have been quite capable of shooting a missile at Paris or London.”

So Iran’s nuclear program is even more dangerous than North Korea’s simply because it is in the Middle East and will inspire its neighbours to do likewise, he says.

Robertson argues Iran’s government is particularly unfit to hold nuclear weapons because of its appalling history of rights abuses: international assassinations, mass torture – including women prisoners of conscience given 15 lashes five times a day – and the 1998 slaughter of a suspected 7000 religious and political prisoners.

Robertson likens these murders to the mass graves of Srebrenica and the Japanese death marches of prisoners of war. It is Iran’s theocratic leaders whom he has dubbed ”mullahs without mercy”. But still, he does not support a pre-emptive attack on Iran by Israel or the US. He thinks the Israeli Prime Minister, Benjamin Netanyahu, is acting precipitately because he fears the millennialist thinking of Iran’s Shiite leaders.

He warns a pre-emptive strike in the absence of a direct threat from Iran would be illegal under international law and would create its own humanitarian disasters. He doesn’t think Iran would use the bomb ”unless they were attacked and the regime was tottering”.

He thinks the weapon used to fix the problem should be international law. He wants laws passed to criminalise governments that acquire new nuclear weapons, and political will harnessed to force disarmament on nations that already have them.

Robertson says laws now permit nuclear weapons to be used in areas that are not very populated, such as at sea. But they should be banned entirely, as are dumdum bullets and landmines, because of their apocalyptic destructiveness.

Mullahs Without Mercy is published in Australia by Random House. Geoffrey Robertson will speak at the Sydney Opera House at 4pm on December 16.

AP: Iran's foreign minister is to visit Austria as...

US slaps penalty on DHL over shipments to Iran, Syria, Sudan

AFP: US authorities said Thursday they had imposed a...