Brutal regime has to change

Ham & High: Lord (Anthony) Clarke of Hampstead, 81, a life peer and former Labour Party chairman, writes about the brutal killing of Iranian dissidents in Iraq and calls on Prime Minster David Cameron and Foreign Secretary William Hague to “open their eyes” over the future of Iran

By Lord Clarke of Hampstead 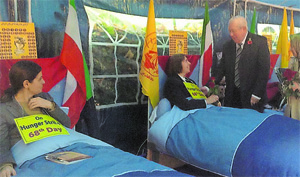 On October 28, I had the privilege of attending a conference at Church House Conference Centre, Westminster, to address the situation in Iran. The conference was chaired by Lord Carlile of Berriew CBE QC and speakers included former House of Commons Speaker Baroness Boothroyd, former head of the United Nations Assistance Mission for Iraq’s human rights ofﬁce Dr Tahar Boumedra, and a number of other members of both Houses of Parliament.

Together we urged David Cameron’s government, and speciﬁcally the Foreign and Commonwealth Ofﬁce, to take immediate action regarding the particular situation of Iranian dissidents in Iraq. On September 1, Iraqi forces attacked Camp Ashraf in Iraq, home to a group of unarmed members of the Iranian opposition movement.

The individuals at Camp Ashraf are protected persons under the Fourth Geneva Convention.

Iraqi forces slaughtered 52 residents and abducted seven others. In the face of such brutality by Iraqi Prime Minister Nouri al-Maliki’s regime, which was carried out at the behest of Iran, it is clear that foreign aid and possible arms sales to Iraq must be stopped until such time as the seven abducted residents have been released.

Furthermore, our government must demand that the 3,000 other residents of Camp Ashraf who have been moved to Camp Liberty be protected by the permanent presence of a UN monitoring team and UN blue helmets.

Iran fears these dissidents. In an attempt to eliminate its main opposition, the Iranian regime has already planned and carried out ﬁve deadly attacks on dissidents in Iraq since 2009 through its Iraqi proxies.

Today, Nouri al-Maliki acts on the command of Iran’s leadership.

When Nouri al-Makili visited the White House last Friday, scores of former senior US ofﬁcials joined Iranian exiles in a rally outside the White House. They called on President Obama to honour US promises of protection to the residents of Camp Liberty and demanded he press the visiting Iraqi PM to bring about the immediate release of the hostages.

In my speech to the conference, I also raised the alarming increase in the number of executions in Iran.

Since coming to power, Iran’s new president has executed more than 250 people, including at least 30 women. The number of executions this year exceeds 500. The regime also continues to execute minors. Hassan Rouhani is the man our leaders tell us is a “moderate”. These are the actions of a butcher, not a moderate.

For more than 30 years I have been involved in highlighting the appalling human rights record of the Iranian regime which has, over the years, carried out horriﬁc suppression of its people, carrying out widespread torture and executions to curtail democracy and freedom. Today, the regime ﬁnances and trains terrorist organisations and provides military support to regimes such as that of President Assad, who massacres his people.

This exposes those continuing to demand appeasement but also rejects military intervention. It urges the international community to support democratic change through the people and their resistance movement. Mrs Rajavi’s 10-point plan calls for internationally monitored free elections. The plan also envisages a secular, democratic and nuclearfree Iran based on gender equality which respects the Universal Declaration of Human Rights and the UN Charter and is at peace with its neighbours as a true force for good and prosperity in the region and beyond.

It is time for David Cameron and William Hague to open their eyes and support the plan. Only by supporting the Iranian people’s demands for democracy will the regime be made to truly change.

Reuters: France spelled out on Friday that it would...

German Trade With Iran Halves in 2019

By Pooya Stone German exports to Iran have fallen...