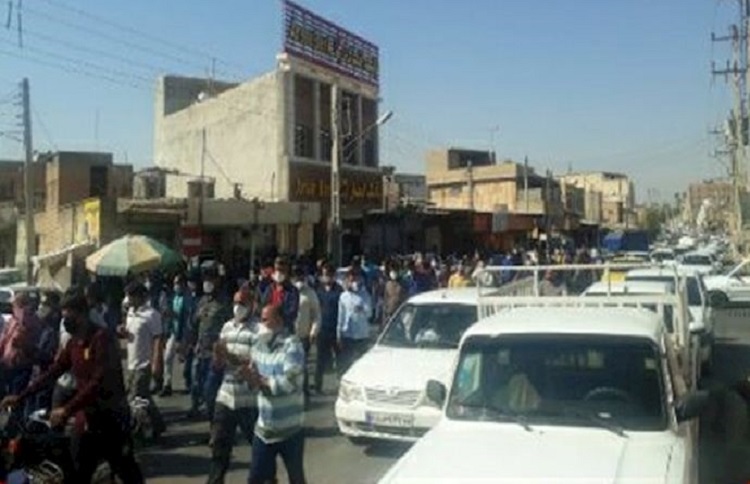 Haft Tappeh Sugarcane Company workers continued their strike for the 21st consecutive day on Sunday, demanding the payment in full of their lost wages, as well as answers from company officials over other issues raised, as they chanted “No to living in shame!” and “A hungry kid won’t listen to mere pledges!”.

Most of the workers in Shush, Khuzestan province, have not been paid since March, with only around a quarter of the 6,000 workers having been paid at all. This means that 4,500 workers and their families have been subsisting with no income for four months. They are also protesting over the status of their contracts,  explaining that the company’s refusal to hire them as permanent workers has left them at the mercy of the bosses, who are able to fire them at will for any (or no) reason.

One protester said: “Those involved in massive embezzlements in this country have such a nerve. Many have stolen billions and fled to other countries like Canada… We workers have nothing left for us. We say we are hungry, they respond by throwing us to jail. We say we want what is rightfully ours, they arrest us. This is how hardworking people are treated in this country.”

These are the protesting workers’ main demands:

On Saturday, the protesting workers in the oil-rich southwest province of Khuzestan were also seen chanting “the state media are a disgrace” and “fellow citizens, listen up, we’re workers, not rioters”  over the fact that the regime-controlled media have not been reporting the protests fairly and have been trying to demonize the cause and the activists repeatedly.

On 4 July, the twentieth day of the week-long workers’ strike continued. These workers are protesting because of their salaries and employment status. Workers say most of them have not received their April salaries. #Iran #IranWorker #IranEconomy pic.twitter.com/HhxSA9EZoE

This three-week protest is far from the first time that these factory workers have marched into the city, calling out slogans against company officials and their efforts to steal from the hardworking employees under the guise of privatization. It is, however, especially notable that they are holding these strikes during the coronavirus crisis, showing just how important the issue is.

The workers say they will continue until their demands are addressed.

Iran and the Businesses Bankruptcy Crisis