Daily Telegraph: Bahrain has indicated Iran was implicated in an alleged plot to overthrow its government after 23 prominent opposition leaders were charged with terrorism offences in the US-backed Gulf kingdom.

Bahrain has indicated Iran was implicated in an alleged plot to overthrow its government after 23 prominent opposition leaders were charged with terrorism offences in the US-backed Gulf kingdom. 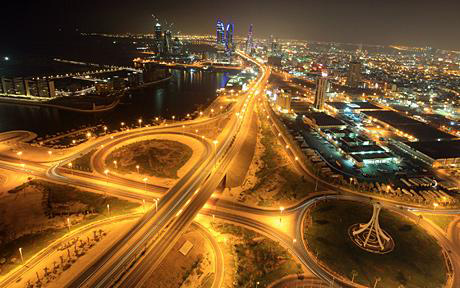 Authorities in the island state, which serves as a US naval base, made the arrests during weeks of unrest in the run-up to a parliamentary election next month.

Officials said activists were members of “a terrorist network with international support” and were planning a campaign of “violence, intimidation and subversion”.

“This sophisticated terrorist network with operations inside and outside Bahrain has undertaken and planned a systematic and layered campaign of violence and subversion,” said Abdulrahman al Sayed, a government prosecutor.

“The leaders of the network have been accused of several crimes including the planning and instigation of violence, conducting a wide ranging propaganda campaign against the Kingdom and seeking to overthrow the regime by force.”

Although the foreign state behind the purported plot was not named, it was widely understood that Iran was the focus of official suspicion. The Bahraini government, which is dominated by the country’s Sunni minority, has frequently accused its Shia Muslim dissidents of collaborating with co-religionists in Tehran.

Hardliners in Iran have sometimes described Bahrain as Iran’s “14th Province”. It is the only Gulf State with a Shia majority. Accounting for 70 per cent or more of the population, the community has been marginalised for decades and resentment at the much richer Sunni elite has festered.

Western military strategists say Iran is desperate to gain a foothold on the Arabian Peninsula to further its regional clout and believes that Bahrain, an archipelago in the Persian Gulf, represents the best opportunity of achieving that ambition.

Although tiny, with a population of just 800,000, Bahrain’s geographical location gives it a strategic importance that easily outstrips its diminutive size.

The US has declared it “a major non-Nato ally” and stationed its Fifth Fleet there.

The charges brought against the 23 activists have been condemned as repressive by human rights groups.

The men were arrested last month during a massive police operation that saw 250 members of linked to the main Shia opposition parties arrested.

Particular concerns centre on Abduljalil al-Singace, the leader of one of the opposition groups, who has been named as the mastermind of the terrorist plot.

Mr Singace was arrested at Bahrain’s international airport as he got off a flight from London, where he had addressed a conference at the House of Lords.

His comments outraged the Bahraini authorities and among the charges Mr Singace faces is an accusation of “contacting foreign organisations and providing them with false and misleading information about the kingdom.”

Along with his co-accused, Mr Singace was allegedly held handcuffed, blindfolded and incommunicado for a fortnight before being charged. He has also told prosecutors that he was tortured.

Human rights organisations have urged the Bahraini government to investigate the alleged torture of Mr Singace and three of his co-accused.

“The Attorney General has a legal obligation to throw out any coerced confessions and any evidence obtained by ill-treatment, including information that led to the men’s indictments,” said Joe Stork, deputy Middle East director at Human Rights Watch.

Daniel James, corporal on spy charges, ‘called himself a general’

The Times: The salsa-dancing Territorial Army interpreter accused of...