AFP: Argentine President Cristina Kirchner Friday proposed to Iran to try suspects accused of a string of anti-Jewish attacks in the 1990s in a third country. 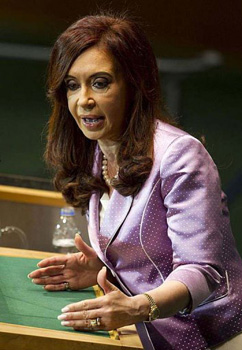 NEW YORK (AFP) — Argentine President Cristina Kirchner Friday proposed to Iran to try suspects accused of a string of anti-Jewish attacks in the 1990s in a third country.

In a speech to the UN General Assembly, Kirchner called on Tehran to “agree in a joint accord on a third country where fair trials could be held.”

She said such a solution was not without precedent, pointing to the case of the Lockberie bomber, a Libyan who was found guilty of the attack on the PanAm plane in 1998 during his trial in Scotland.

Buenos Aires has issued warrants for the arrest of Iranian Defense Minister Ahmed Vahidi and five other Iranians and a Lebanese accused of planning and carrying out the bombing of the AMIA, which claimed the lives of 85 people.

They also suspect Tehran was behind an attack on the Israeli embassy in the Argentine capital in 1992 in which 29 people died.

Iran has so far firmly rejected the Argentine request for the arrests and extradition of its nationals.

In her speech before the UN General Assembly, Kirchner also reaffirmed Argentina’s claim to sovereignty over the Falkland Islands, known in Spanish as the Malvinas, long a bone of contention with Britain.

She accused Britain of “using and abusing” its powers as a permanent member of the UN Security Council, to maintain its hold on the remote South Atlantic island chain.

The executive body of the UN “must be reformed because so far it has not been able to preserve international peace and security,” she said.

Kirchner also deplored the decision by Britain to explore for oil in waters off the Falklands, warning there could be “an environmental disaster.”

After a short 1982 war, Britain regained control of the islands, which lie some 450 kilometers (280 miles) off Argentina’s coast.

But Argentina has never given up its claim to the islands and was outraged when oil exploration began there in late February.

Iran: Those arrested in fire festivities will spend New Year in jail