AFP: Iran used Red Crescent ambulances to smuggle weapons and agents into Lebanon during Hezbollah’s 2006 war with Israel, a leaked US diplomatic cable showed on Monday. 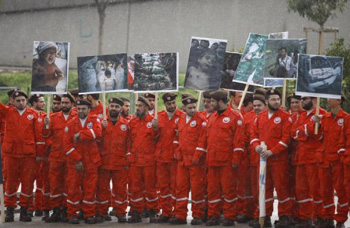 The 2008 classified cable which originated in Dubai quotes an Iranian source as saying the Iranian Red Crescent was used as a cover by members of the elite Revolutionary Guard to enter Lebanon during the conflict.

It added Red Crescent staff had seen “missiles in the planes destined for Lebanon when delivering medical supplies to the plane.

“The plane was allegedly half full prior to the arrival of any medical supplies,” the cable said.

The Iranian source also said an IRC hospital in Lebanon was handed over to the control of Hezbollah at the request of Hassan Nasrallah, secretary general of the Shiite party.

Israel and the United States have long accused Iran of supplying military and financial backing to Hezbollah.

A party official reached by AFP had no immediate comment on the leaked US cable, which was among more than 250,000 documents that WikiLeaks released on Sunday.

BBC: A former nuclear negotiator has been given a...