US Senator Kerry: ‘All options’ open on Iran plot

AFP: Senior US Senator John Kerry left the door open Wednesday to military retaliation against Iran over an alleged plot to assassinate the Saudi ambassador to the United States. 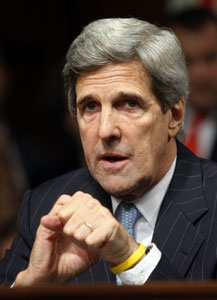 WASHINGTON, October 12, 2011 (AFP) – Senior US Senator John Kerry left the door open Wednesday to military retaliation against Iran over an alleged plot to assassinate the Saudi ambassador to the United States.

Asked whether using force was a possibility, the Democratic lawmaker told reporters: “I don’t think anything should be taken off the table at this point in time.”

“There are a lot of options, they’ve all got to be discussed very carefully. I think the first thing to do is analyze all of the evidence very carefully,” said Kerry, who chairs the Senate Foreign Relations Committee.

The senator said key lawmakers on the Senate’s Intelligence, Armed Services, Homeland Security, and Foreign Relations Committees were scheduled to receive a briefing from President Barack Obama’s administration on the alleged conspiracy.

Kerry said lawmakers would assess “what the layers of knowledge are” in Tehran about the alleged plot.

US officials on Tuesday said they had charged two Iranians, one of them a dual US citizen, with preparing to carry out a bomb attack on the Saudi ambassador under a plan “conceived, sponsored and directed from Iran.”

The US Justice Department accused the Quds Force, a special forces unit incorporated in Iran’s Revolutionary Guards, of being involved, based on testimony given by one of the Iranians who was in US custody.

The other Iranian, said to be a member of the Quds Force, was at large and believed to have left the United States, according to US authorities.

Reuters: Iran would respond if the United States were...

Time to empower the Iranian Resistance

UPI: One of the major foreign policy tasks for...