New York Times: Analysts say that because it is backed by Iranian funds and free of any burden of governing, Islamic Jihad has been able to assert itself while Hamas is partly blamed by a restive population for rampant unemployment and daily shortfalls of fuel, electricity and water. 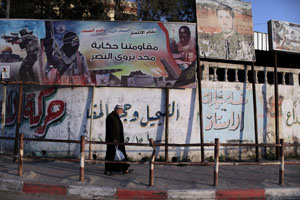 GAZA — Shortly before midnight, seven black-masked young men in camouflage stood in a field of waist-high weeds, Kalashnikov rifles pointed toward the Mediterranean Sea a half-mile away.

No Israeli soldier has set foot in Gaza City in five years, but the 25-year-old commander of this band of Al-Quds Brigades — the armed wing of Islamic Jihad — said his troops stand vigil here nightly to “protect the Palestinian people” from any “incursion.” Every few minutes, in what may have been a nightly ritual or an effort to broadcast to the world their readiness to fight, the radio on the commander’s shoulder crackled with warnings: drones in the east, F-16s overhead, gunboat movement at sea.

“You are the men; you, the Al-Quds Brigades, are the real men,” the voice said after reciting verses from the Quran praising jihadist militants and martyrs. “God protect you in the field.”

Smaller and less known internationally than the militant Islamic Hamas faction that has ruled since 2007, Islamic Jihad and its Al-Quds Brigades are having something of a renaissance. Last month the group captured global headlines by firing a barrage of 100 rockets toward Israel in less than an hour. Polls show that support for Islamic Jihad among residents of Gaza remains far below that of the leading political factions but has seen an uptick as the group has lately built health clinics, opened schools, and expanded its family-mediation services.

Though not a signatory to the reconciliation pact last month between Hamas and the Palestine Liberation Organization, Islamic Jihad would join Hamas as part of the formal Palestinian leadership if the deal were implemented. At the same time, Egypt recently allowed three of the group’s senior leaders to leave Gaza through the country’s territory — to meet the group’s chief in Beirut — something no Hamas official had been allowed to do since last summer’s military-backed ouster of President Mohamed Morsi of Egypt.

Founded nearly a decade ahead of Hamas, Islamic Jihad has long shunned electoral politics to focus on military resistance to the Israeli occupation. Now, analysts say that because it is backed by Iranian funds and free of any burden of governing, Islamic Jihad has been able to assert itself as the main military expression of Palestinian nationalism, while Hamas is partly blamed by a restive population for rampant unemployment and daily shortfalls of fuel, electricity and water.

There is scant ideological space between the two movements. While some characterize Islamic Jihad as a rival Hamas struggles to control, leaders of both groups, as well as independent analysts, say they are coordinated and complementary. As Hamas has suffered from severed ties with Syria, Iran and Egypt, Islamic Jihad has maintained relations with all three and increased its activity in Gaza.

“They are a very distant second to Hamas in military power, in supporters, in civil society, in every dimension of strength that you could think of, but they’re growing for sure,” said Nathan Thrall of the International Crisis Group, who wrote a recent report on Gaza. ”They have similar visions and strategic ideas. Some of the tension comes from the fact that Islamic Jihad doesn’t govern Gaza and doesn’t really suffer the consequences. They’re ready to attack Israel all day long.”

Abu Ahmed, a spokesman for Al-Quds Brigades who — like the 25-year-old commander, Abu Malek — agreed to an interview on the condition that he be identified only by his nickname, declined to say how many fighters it enlists or how much they are paid. He was quoted by Reuters in 2011 saying the Gaza force was 8,000 strong.

A senior intelligence official with the Israel Defense Forces put the number at half that, compared with 10,000 for the Izzedine al-Qassam Brigades, Hamas’s armed wing. Together, he said, the two groups have manufactured 200 rockets capable of reaching Tel Aviv, 10 times the number they possessed two years ago, though such estimates could not be verified and could be part of an effort to emphasize the threats Israel faces.

Hamas officials were clearly irked last month when Islamic Jihad announced it had worked directly with Egypt’s new military-backed government, which deemed Hamas a terrorist group, to restore calm with Israel. But Islamic Jihad leaders, operating from exile in Damascus, have also tried to smooth relations between Hamas and Iran after a parting over the Syrian civil war.

“They are trying to walk on a very thin line between Israel and Hamas and the Iranian pressure in the background,” the Israeli intelligence official said. “They do not want to embarrass Hamas.”

Hamas, he added, “finds itself in a very complicated situation,” concerned that Islamic Jihad’s aggression risks unwanted escalation with Israel, “but they do not want to be considered or portrayed as the government that limited the resistance, so they prefer to talk with them and to coordinate with them.”

Islamic Jihad was created in 1979 by Palestinian students at Egyptian universities who were inspired by Iran’s Islamic revolution, and disillusioned that the Muslim Brotherhood — from which Hamas spun off years later — was not focused enough on Palestine. Its founder, Fathi Shikaki, was assassinated by Israeli agents in Malta in 1995; in some Gaza precincts, his picture is more prominent than that of the Hamas prime minister.

The United States designated Islamic Jihad a terrorist organization in 1997. The secretary general, Ramadan Shallah, who is on the F.B.I.’s most wanted list, said in a 2009 interview that he would never “accept the existence of the state of Israel,” and that “our sacred duty is to fight.”

The Palestinian Center for Policy and Survey Research found 5 percent of Gaza residents supporting Islamic Jihad in December and 4 percent in March, up from 1 to 3 percent in recent years. “It’s always been an elitist group,” said the center’s director, Khalil Shikaki, who is also Fathi Shikaki’s brother. “It appealed more to the educated youth rather than to the older generation or to the mass of people.”

Abu Malek, the field commander, said he joined at 18 because of Islamic Jihad’s “pioneering ideology” promoting “the liberation of all Palestine from the sea to the river.” He says he teaches sixth grade at a Hamas-run school and studies for a master’s in Arabic by day, but goes to the field every night after the last of Islam’s five daily prayers, remaining until the dawn call for the first.

His men stood amid scrawny trees, one with arms folded, another holding his automatic rifle. A third shouldered a rocket-propelled grenade. The field, in southwest Gaza City, is rimmed by apartment blocks. It sits about 600 yards behind a restaurant and gas station on the main beachfront road.

One recent night, Abu Malek said, an Israeli bomb landed nearby. “We remained spread because it is dangerous to go to the place immediately,” he recalled. “But in case an invasion follows the airplane, we will get ready to counter.”

The armed wing remains Islamic Jihad’s priority, but its civic activities have been swelling. Daoud Shihab, the chief spokesman — who, like Abu Ahmed, operates from an unmarked office above a store selling strollers and toys — said the movement planned to build a cardiac hospital in central Gaza and four clinics. Those projects have been delayed by Egypt’s shutdown of smuggling tunnels and Israel’s ban on import of concrete and steel.

Islamic Jihad runs three private elementary schools and is planning three more, Mr. Shihab said. The group has doubled its kindergartens to 100 in the past five years; at one in Gaza City’s Zeitoun neighborhood recently, some of the 700 students alternated between chanting Quranic verses and singing the A B C’s.

Above the bustling market in Shejaya, an Islamic Jihad stronghold, sits one of the movement’s 12 reconciliation centers, where middle-aged men in religious robes mediate disputes between families. Omar Farra, a mosque preacher and the movement’s leader, said the men resolved hundreds of cases a year, much quicker than the Hamas courts.

After a woman died in childbirth, her family demanded about $35,000 from the doctor. Mediators persuaded the family to accept $24,000, but the doctor would pay only about $21,000, so Islamic Jihad bridged the gap.

“What is more important for us is to make the reconciliation,” Mr. Farra explained, “so we paid.”

US again calls on Iran to cease enrichment work