Saudi Arabia tells Iran to remove its forces from Iraq 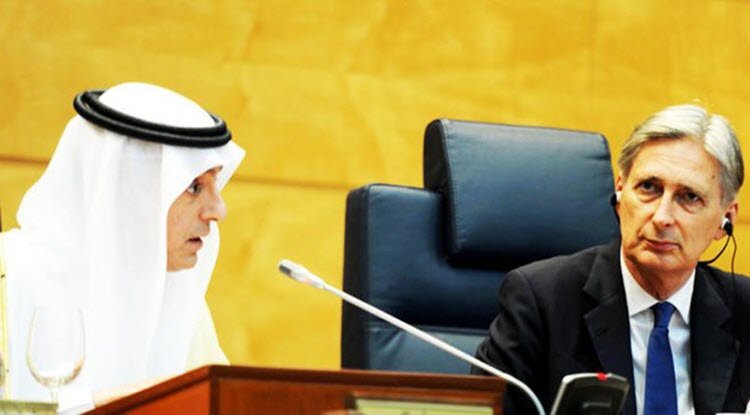 London, 30 May – Saudi Foreign Minister Adel Jubeir said the sending of Iranian Shiite units to Iraq for military operations is unacceptable which is why Saudi Arabia insist that Iran withdraws all its troops from Iraq.He said: “Iraq’s problem is religious conflicts caused by the Iranian interference.”

Jubeir held a joint press conference with his UK counterpart Philip Hammond aired by the Al Arabiya Channel, in which he warned Iran that sending military units to Iraq with or without government approval was unacceptable.

Jubeir said: “Sedition and division in Iraq are the results of sectarian policies that developed out of Iran’s policies in Iraq. If Iran wants stability in Iraq, it has to stop intervening and withdraw.”

Hammond reassured other Middle Eastern countries that the world is still watching Iran in the wake of last year’s nuclear deal.

Hammond said: “Just because we’ve made an agreement with Iran on its nuclear programme does not mean that we will turn a blind eye to Iran’s continuing attempts to destabilise the region or to its ballistic missiles programme which remains a serious threat to peace and which breaches UN resolutions.”

Jubeir said: “We supported that agreement so long as we were assured that Iran will not be able to acquire a nuclear capability. They are, after all, a neighbour and we will have to live with them. But it’s difficult to live with a neighbour whose objective is to destroy you: that’s why the relation with Iran is not what it should be.”

Jubeir recommended that Iran deal with its domestic problems before interfering with other countries.

This news, reported by Al Arabiya English on Sunday, comes one day after Sunni politicians in Iraq condemned the visit of Iranian General Qassem Soleimani to Shi’ite paramilitary forces; fighting alongside the Iraqi army to regain control of Falluja.

According to Reuters, three lawmakers from Anbar suggested that the visit by Iran’s Quds Force commander could fuel tension and cast doubt on Baghdad’s assertions that the offensive is an Iraqi-led effort to defeat Islamic State (ISIS), and not to settle scores with the Sunnis.

The city of Falluja, about 50 kilometres west of Baghdad, is a stronghold of the rebellion that fought the U.S. occupation of Iraq and the Shi’ite-led authorities that replaced former Iraqi leader Saddam Hussein, a Sunni.

The Iraqi government refuse to confirm Soleimani’s visit but stressed that Iranian advisers are present in Iran to assist with the abolition of ISIS in the same capacity as the US Coalition forces.

Hamid al-Mutlaq, a Member of Parliament (MP) for Iraq, rejected this idea.

He said: “We are Iraqis and not Iranians. Would Turkish or Saudi advisers be welcomed to assist in the battle?”

Salim Muttar al-Issawi, another MP, said: “Soleimani’s presence is suspicious and a cause for concern; he is absolutely not welcome in the area.”

A third MP, Liqaa Wardi, said: “I believe that the presence of such an official from the (Iranian) Revolutionary Guard could have sectarian implications.”

Carrots for the Mullahs

The Wall Street Journal - Editorial: The governing board...