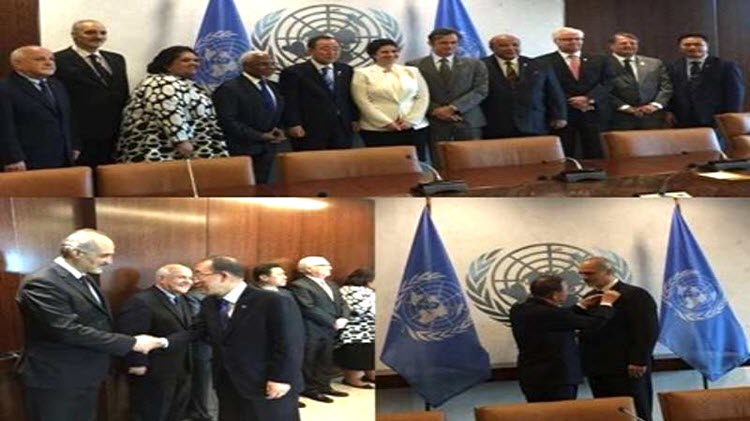 London, 1 November – Bashar Jaafari, one of the fiercest defenders of the notorious Bashar al-Assad’s supporter in Syria, has been given keepsake by the United Nations (UN).

Just a few days ago, on October 24, the Secretary-General of the UN Ban Ki-moon honored several envoys for their ten years of service, issuing them with a keepsake. Bashar Jaafari was among them, smiling in a photograph during the ceremony, well known as the defender of Bashar al-Assad’s in Syria.

On the same day, many innocent civilians in Syria were killed or wounded following bombing strikes by al-Assad and his allies.

Bashar Jaafari’s name could not be missed by anyone following the news and developments in Syria. It was mentioned when news focused on the war crimes committed in the country, and the crimes against humanity that were carried out by Bashar al-Assad and his allies, including the Iranian regime.

During the ceremony, Jaafari was rewarded for his ten years of service. This period included the time when the Syrian civilians conducted peaceful protests to defend their basic human rights, and oppose the criminal acts carried out by al-Assad’s regime. Jaafari’s tenure also included the uprising which followed these protests.

The accounts of Jaafari being involved and supporting al-Assad are numerous. On September 29, after two hospitals were bombed in Aleppo by al-Assad and his allies, Jaafari expressed his joy after a reporter posed him some questions, by grinning before he went off to attend a meeting at the UN Security Council.

Only three days after the ceremony where Ban Ki-moon gave a keepsake to envoys, including Jaafari, dozens of children were killed in another bombing raid in Idlib – a despicable act which Ban Ki-moon described as a war crime.

The National Council of Resistance of Iran (NCRI) holds strong views about awarding people who are involved in such war crimes, with special recognition. “There is no justification for giving awards to criminals like Bashar Jaafari for any reason, especially by the Secretary-General of the United Nations,” a note from the editor stated on the NCRI website. “You may want to tell the Syrian orphans, and the suffering and wounded Syrian children, who are pulled out from the debris of bombing in Aleppo every day, about your move and let them tell you how they feel about your approach and the work of those who are supposed to defend the UN charter and its objectives.”

The UN was founded on the principles and aims of preventing atrocities, such as the Holocaust, from happening again. This should be the sacred mission of the UN Secretary General, acting as one of the main advocates for the organisation. Giving an award to someone who is so closely involved and supportive of al-Assad’s crimes in Syria, goes against all these principles.

The diplomatic standards which were set in place, following World War II, should serve as a way of establishing better relations, peace between countries and supporting human rights. If they do not serve this purpose, then these standards must be discarded, in the spirit of true democracy.

During the last weeks of his title as the UN Secretary General, Ban Ki-moon should adapt his previous courageous position and place Jaafari and his allies in the International Criminal Court for their crimes against humanity.

US analyzing recordings of Iranians

AP: The U.S. military has video and audio recordings...