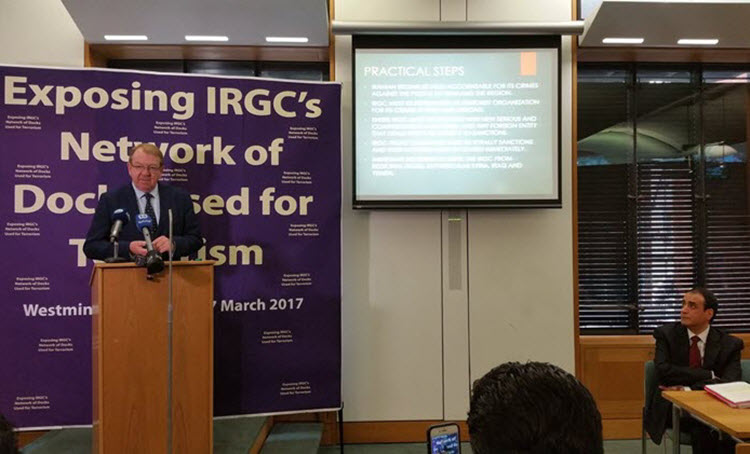 London, 10 Mar – The Iranian opposition, the National council of Resistance of Iran (NCRI), held a press conference in London on Tuesday regarding Iran’s Revolutionary Guards (IRGC).

The NCRI were able to reveal how the IRGC is able to mask its terrorist and smuggling activities. Their information and evidence came from the People’s Mojahedin Organization of Iran’s (PMOI/MEK) extensive network inside the country.

They claim that the IRGC owns 90 docks – most of which are located in the southern shores of the country. This is almost half of the docks that are officially registered in Iran.

It is through these docks that the IRGC is able to transport weapons and military equipment to its many militia groups that it controls.

The history of these docks goes back more than thirty years when the founder of the Iranian regime, Ruhollah Khomeini, ordered the IRGC to establish this network allowing them to get past all restrictions, such as customs, and more importantly – to prevent international attention.

The current supreme leader of the country, Ali Khamenei, took Khomeini’s lead and has tasked the IRGC with increasing the number of docks.

The IRGC has thus been able to gain even more control of the economy of Iran. It controls a huge portion of the country’s imports and exports and floods the market with inexpensive goods that ruin local production and trade.

It is said that the IRGC makes around $12 billion per year through illegal trade. It goes without saying that most of this money is used to fund the export of terrorism around the world, the ballistic and missile programs, and the acquisition of weapons of mass destruction.

The NCRI and the PMOI were able to uncover front companies that the IRGC uses carry out illegal activities, as well as shipping companies and the names of the docks. They also advised that the IRGC has gradually been able to gain more and more control of various large oil tankers.

Although the international community has been able to block some arms shipments, this is only a very small percentage of the total number of shipments leaving Iran.

This information has been revealed at a time when there is high tension between the United States and Iran. The Trump administration put Iran “on notice” after it test-fired ballistic missiles, and has since imposed numerous sanctions.
The revelations made by the NCRI make it even more urgent that the IRGC is designated as a foreign terrorist organisation.

CNN: Iranians across the country Thursday were marking the...