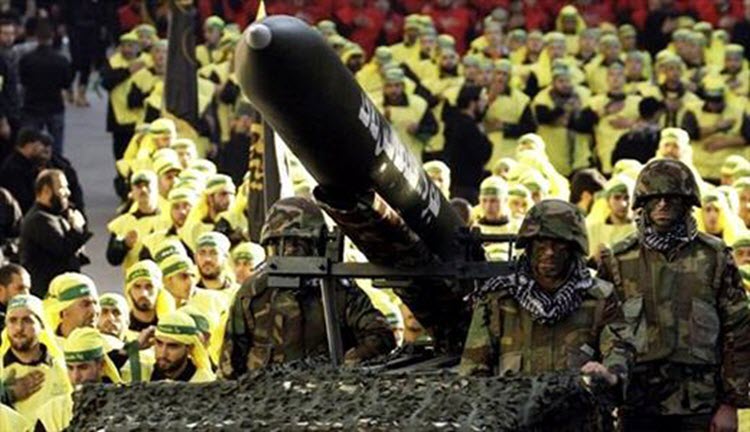 London, 20 Mar – According to a report in Al-Arabiya’s Persian language website on March 11, the Islamic Revolutionary Guard Corps (IRGC) is building of a missile factory for Lebanon’s Hezbollah.

Despite the former U.S. administration officials’ optimism, as well as that of the six world’s powers, who signed the nuclear deal with Iran, believing that the country would come around, the regime continues provocations.

Al-Arabiya’s report says that following the bombing of a weapons factory belonging to IRGC in Sudan, the Iranian regime is now building several missile factories in Hezbollah-held territories in Lebanon. The website says further that a high ranking IRGC commander commented that Iran is building missile factories, and in three months’ time will turn the operations over to Hezbollah.

“The IRGC official also reveals that these factories have multifunctional capabilities which enable the industry to manufacture even drones among other things such surface to surface and surface to air missiles with a range of over 300 miles,” Al-Arabiya reports, adding, “Informed sources say that the actual factories are built in bomb proof bunkers over 150 feet deep underground to avoid Israeli air strikes.”

Brigadier General Hossein Dehghan, Iranian regime’s defense minister, said. “The Lebanese Hezbollah is now able to build missiles covering the hole of Israel.” He has also commented on the need to “wipe out Israel.” On March 13, in an interview with state-run television, General Dehghan unveiled IRGC’s strategy to attack “enemies” in the West. He called it a situation of asymmetric warfare, where “we need to have sufficient power to surprise the enemy. In other words, we need to hit the enemy where it hurts the most.”

Hassan Abbasi, another IRGC strategist, make remarks that were picked up by CNS NEWS when he said that U.S. heartland was their target, and they had plans to hit the U.S. where it hurts. The similarities of these comments should not be taken lightly.

Nikki Haley, US ambassador to the United Nations, referring to the missile tests in recent weeks, said it was imperative to “get Iran and their proxies” out of Syria, to maintain longstanding peace.

On March 9, Army General Joseph Votel, the CENTCOM commander, told the Senate Armed Services Committee that a range of competing interests in the Middle East were creating complex situations for U.S. Central Command to navigate. General Votel also testified that, “Iran seeks to be the regional hegemon,” and “poses the greatest security threat in the whole CENTCOM area of responsibility.” He said that the country is building a layered defense that includes a Russia-built air defense system and anti-ship cruise missiles.

It is not just U.S. officials who are alarmed, but most Arab neighbors are, too. On Sunday, Salman Al-Dossary, former editor in chief of Asharq–Al–Awsat wrote, “Iran’s elite Revolutionary Guard, an armed force intended to protect Tehran’s theocratic regime, has registered disruptive and intrusive activity in 14 regional states.”

He believes that the IRGC has been stepping up its meddling in Iraq, Syria, and Lebanon from the time the Iranian regime began talking with the six world powers about the nuclear issue. Al-Dossary bases his argument on an investigative report the paper published on March 10 by Struan Stevenson, president of the European Iraqi Freedom Association, who argued for the blacklisting of the IRGC. Using Stevenson’s report, Al-Dossary estimates that the cost of regime’s involvement in Syria alone amounts to $100 billion.

A valuable book was introduced last week in Washington. “The Rise of Revolutionary Guards’ Financial Empire” describes how IRGC pays for its terrorists’ plans in the region. The U.S. representative office of the National Council of Resistance of Iran (NCRI) held a press conference about the new book.

Ambassador Adam Ereli said in the conference, “…the book shows that 50 percent of Iran’s GDP is in the hands of regime’s leader and the organizations under his control, primarily the Revolutionary Guards (IRGC), which uses the government assets for financing of terrorism abroad and repression at home.”

Further, he says, “Sadly the Obama administration did not realize that unfreezing Iranian assets following the nuclear deal would automatically end up in Syria, Yemen and Iraq to bankroll IRGC and Quds Force build up in the more vulnerable areas in the region such as Aleppo. The regime in Iran neither has nor is willing to spend a dime on problems ordinary citizens have in Iran. Iranian citizen in southwestern Iran are simply dying of air pollution and dust storms. The only money ever spent is to upgrade and modernize weapons for suppressive security forces in the country. In the course of past four decades that the mullahs are ruling Iran one fact remains unchanged that Iranian regime would never change its behavior. It has ruled with an Iron fist at home and unlashed IRGC and Quds Force on its neighbors in the region. It may, from time to time, depending on which US administration is in the White House somewhat changed course to avoid direct confrontation. The time has certainly come to take concert actions to stop this regime. The place to start is indeed blacklisting the IRGC.”