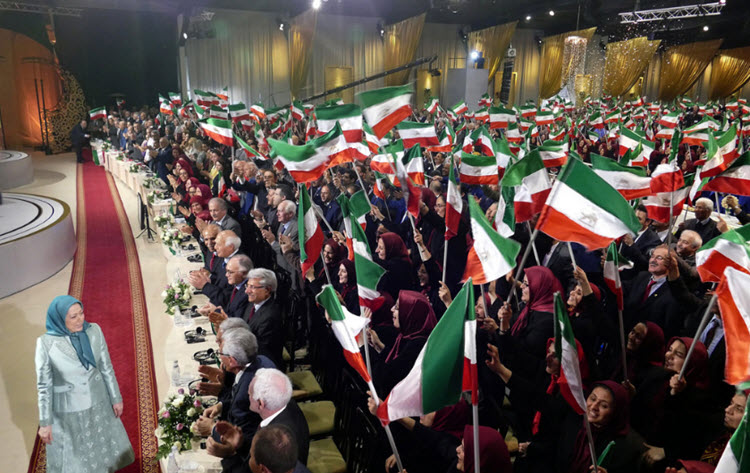 London, 22 Mar – At the celebration of Nowruz, the Iranian New Year, held at Tirana, Albania. The guests included PMOI (MEK) members and friends from Albania, France and United States.

Congratulations on Nowruz, the blossoming of spring and the beginning of the year 1396!

Greetings to each and every one of you freedom fighters who have established the Third Ashraf contrary to the wishes of the Velayat-e Faqih regime!

I would also like to extend my greetings from here to my dear countrymen for the beginning of the New Year.

I congratulate you, Iranian Kurds, Baluchis, Arabs and Azeris, all the colorful flowers of Iran’s garden. I greet my compatriots around the world who can hear my voice. Congratulations on Nowruz and the beginning of 1396!

May this year’s celebration harbinger the defeat of Velayat-e Faqih who has enchained Iran! May this Nowruz mark the advent of the spring of freedom and national sovereignty in Iran!

May the end of winter this year harbinger the defeat of the mullahs’ belligerence and aggression in the region, and I particularly wish for the liberation of the people of Syria from the clutches of this brutal regime.

Last year was an auspicious one when the men and women of Ashraf, those who will bring spring to their nation, broke out of long years of siege and successfully accomplished their big campaign for the safe and secure collective relocation of their organization.

For 14 years, we were not together in the Nowruz celebration. Those were the years of siege and consecutive attacks, the years of the shameless terrorist designation of the PMOI/MEK and many other spurious cases against them, the years of appeasement.

Now is the time for celebration, celebration of happiness, joy and glory; the PMOI have gathered together, in the presence of some of the members of the National Council of Resistance and in the presence of the honorable supporters of the Iranian Resistance; these double our pleasure and delight in this festivity, celebrating Nowruz and the promotion of the democratic alternative for the overthrow of the religious dictatorship ruling Iran, and starting the march of triumph.

So, every Iranian whose heart beats for freedom, is today with us in this Nowruz celebration.

Despite all the pains and sufferings, Iran’s nation kept her hope alive by celebrating Nowruz more passionately every year, demonstrating that she will not give up her big dream until the garden of her wishes bears flowers.
In this new phase, the PMOI has built a new organizational structure with the scent of spring in human relations. By upholding honesty and selflessness, they have given freshness and prosperity to their movement. They have strengthened their will to liberate their homeland. And they are prepared to embark on maximum offense to achieve successive victories for the people of Iran.

So to those who are incarcerated, those who are in exile, and everyone who has not given in to darkness and depravity, we say that winter is gone and the demise of the religious dictatorship is just as inevitable.
To members of the National Council of Resistance of Iran, to members of the People’s Mojahedin Organization, to all their steadfast supporters around the world, to those who are setting up 1000 bastions of rebellion and freedom and 1000 Ashraf’s inside Iran, and to the leader of the Iranian Resistance, Massoud Rajavi, I would like to say that the best Nowruz is looming for our nation. Happy New Year!

Let me welcome the honorable personalities who have travelled long distances to attend our Nowruz celebration here.

We also greet our Albanian friends and sincerely thank them for their presence here. We appreciate them again for opening the doors of their beautiful country to the PMOI.

I would like to tell you that your support for human rights and democratic change in Iran and your solidarity with the Iranian people’s struggle and their children who have risen up for freedom and democracy, is very dignified, wise and responsible and will place each and every one of you in the ranks of the most genuine advocates of human rights and democracy of our times. Every step of yours in this path benefits the whole world.

In the collective and historic conscience of the Iranian nation, Nowruz is the translation of these propitious words: Freedom and democracy. After all, what is the philosophy of Nowruz?

I am explaining this for our dear guests from Albania, France and the US.

In the ancient Iranian myths, Nowruz symbolizes the downfall of an evil ruler whose power relied on daily execution of Iran’s youths. And the day he was overthrown by a mass uprising and a new government was established based on justice and freedom, was called Nowruz. Yes, change is the philosophy of Nowruz and its essence is freedom and justice.

Thus the fact that Iranians so much love to celebrate Nowruz derives from their deep individual and social need to express their desire for freedom and prosperity.

Fellow Iranians,
Last year marked the PMOI’s glorious accomplishment of 14 years of steadfast endurance. The Iranian Resistance shined brilliantly in the successful relocation of PMOI members, an undertaking that under Massoud Rajavi’s leadership and supervision foiled Khamenei’s scheme to destroy the movement.

The movement seeking justice for victims of the 1988 massacre also found its way last year to conferences and official reports of the United Nations despite numerous obstacles and much stonewalling by the regime.
Last year, we also embarked on the campaign to blacklist the Iranian Revolutionary Guards Corps (IRGC) and impose an international siege on this cannibalistic regime.

In a word, last year could be summed up as the year of progress by the Iranian people’s Resistance and the year of defeat for both factions of the religious fascism ruling Iran.

They failed in the face of growing protests by workers, teachers, retirees, and other social strata. According to the highest official of the regime’s State Security Force, our people staged some 7 to 11 thousand protests over the past year against the regime’s policies. Indeed, this is something beyond protest demonstrations. It is rather a daily drill for uprooting the mullahs’ rule of oppression and injustice.

• First, they fear the Iranian people’s Resistance and uprising.

• Second, the US policy in the region. The regime’s officials acknowledge that the mullahs are extremely concerned and need to reorganize to face this problem.

• And third, the dilemma of Khamenei’s succession which has created a deep crisis behind the scene. They face all these problems while they have lost their bomb-making program the international community can completely take this lever from mollahs’ hands.

Needless to mention that the regime’s election shams have always been boycotted by the Iranian people and Resistance since June 20, 1981. And this will continue until the overthrow of the regime and establishment of popular sovereignty instead of the mullahs’ illegitimate regime. The genuine vote of the Iranian people is the overthrow of the velayat-e faqih regime in its entirety.
Therefore, I would warn Western governments against falling for the regime’s hoaxes and election shams and victimizing the people of Iran. The policy of overlooking our people’s human rights, freedom and resistance can no longer be continued.

Only a few weeks after the US presidential election, I declared: The people of Iran, the Iranian Resistance, and the regional nations and states expect that there would be a fundamental revision in the US policies of the past three decades, and particularly the past 16 years. And I pointed out that nothing has been more helpful to Iran’s ruling religious dictatorship than the US appeasement.

Accordingly, these days that Iran policy is being discussed, let me point out to the US and EU governments that any Iran and Middle East policy that does not respect the Iranian people’s struggle for freedom and does not endorse the popular demand in the region for urgent dissolution or expulsion of the IRGC and regime’s forces, is doomed to fail.

Indeed, the overthrow of the religious dictatorship ruling Iran is entirely the responsibility of the Iranian people and resistance. Therefore, what we expect is termination of concessions and assistances which have contributed to the regime’s rule for years.

On this basis, our demands are as the following:

• First, make your commercial and diplomatic relations contingent on end to executions and torture in Iran.

• Second, expel the Iranian regime’s criminal and invasive forces who have infiltrated the region by taking advantage of the West’s silence and appeasement.

And finally, respect the Iranian people’s struggle for freedom.

Dear friends,
In the very moments when the old year transforms into a new year, the people of Iran as a ritual pray to the Almighty, the transformer of all circumstances. They ask Him to change theirs into the best conditions. They pray for a new era of freedom, prosperity, and national sovereignty.

This prayer and wish is the urgent demand of our nation. It has been 39 springs that our movement has been resisting to overcome the mullahs’ religious tyranny and achieve such glorious destiny.

Ever since we rose up to realize the spring of freedom, Massoud said, “No one can stop the coming of spring”, and he has been leading the Resistance movement over all these tumultuous years to overcome the enemies of spring.

So, reaching the great Nowruz of freedom is what matters.

A colorful Nowruz where the Baluchis, Kurds, Arabs, Azeris and etc. would share. A rich Nowruz filled with tolerance where Shiites and Sunnis, Christians and Jews, and followers of all religions and creeds can co-exist in peace in a society based on separation of religion and state.

Yes, the Nowruz of freedom where everyone is free to express and proselytize their thoughts and opinions, to elect and promote their political traditions, to change any government that does not provide the interests of people, where everyone is free to choose their clothing and no one is subjected to compulsions.
This is the political and social Nowruz of the Iranian nation. Although it seems like a dream but it is achievable. This glorious cause is imminent. Despite being in chains and bondage of the enemy, the emancipation of this nation is possible and we can and we must realize it.

Iran’s freedom fighters, the PMOI and those who must bring about the nation’s spring, the army of Nowruz and the army of freedom, have risen up for this mission. And as Massoud said, “The vanguard persists and pays the price as much as is necessary so that this lock would ultimately break open.”

Yes, this lock will break open, this wall will crumble and this winter will end.

And the Nowruz of Iranian people’s freedom will loom.
Hail to Iran
Hail to Freedom
Hail to you all