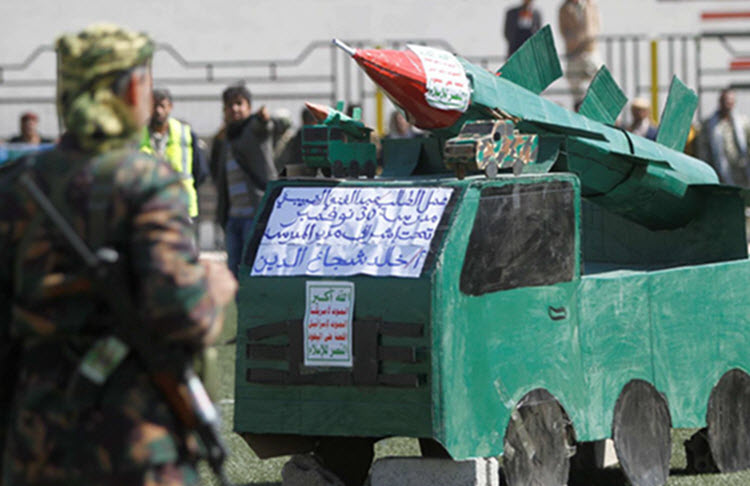 London, 02 Apr – The Iran-backed Houthis in Yemen have been boasting about their March 25 missile attacks on Saudi Arabia, supposedly in order to impress the increasingly disillusioned Yemeni people, but the Houthis are living dangerously, even for a terrorist group that deposed a rightful government.

So far in the three-year-long Yemeni Civil War, the Houthis have launched more than 100 missiles against Saudi cities and installations. Their most-recent attack launched seven missiles at the Kingdom and actually killed an Egyptian resident of Riyadh and wounded two other civilians; most Houthi missiles have been intercepted by Saudi defence systems beforehand, which prevented any deaths until now.

This attack, on the third anniversary of the Yemeni War, actually highlighted Iran’s role in the conflict and direct support of the Houthis.

Although Iran has continually denied supplying the Houthis with ballistic missiles and other weapons in violation of two UN resolutions, UN researchers and Western powers have consistently cited Iran’s supply of the weapons and otherwise destructive influence.

Even Iran itself cannot deny it, a senior Iranian official told Reuters that Iran’s Quds Force is seeking to further “empower” the Houthis by increasing the “training, arms and financial support”, that it is already giving the Houthis.

Thus, when the Saudi-led coalition explains that Iran is behind the attacks and that it reserves the right to respond, we should believe them and accept that.

The international community thankfully seems to be waking up to Iran’s malign involvement in Yemen, with the US State Department agreeing that the Saudis have the “right to defend their borders against these threats”, the UK calling on Iran to “stop sending in weapons which prolong the conflict”, and French Foreign Minister Jean-Yves Le Drian stating outright that Iran is supplying the Houthis with weapons in violation of the arms embargo.

It’s not just Western governments either – Amnesty International’s Samah Hadid, the deputy director for Middle East campaigns noted that these missile attacks should not be ignored just because Saudi Arabia managed to intercept them and stop widespread casualties.

While the UK-based investigative organisation Conflict Armament Research accused Iran of supplying the Houthis and other Iranian proxies with the components for roadside bombs in a report released just prior to the attack on Saudi Arabia.

Iran’s disregard for peace and security is alarming and experts agree that Iran is using the Houthis to distract from Iran’s domestic crises. Thus, as Donald Trump get tough on Iran, we must brace for more provocative behaviour by Tehran.