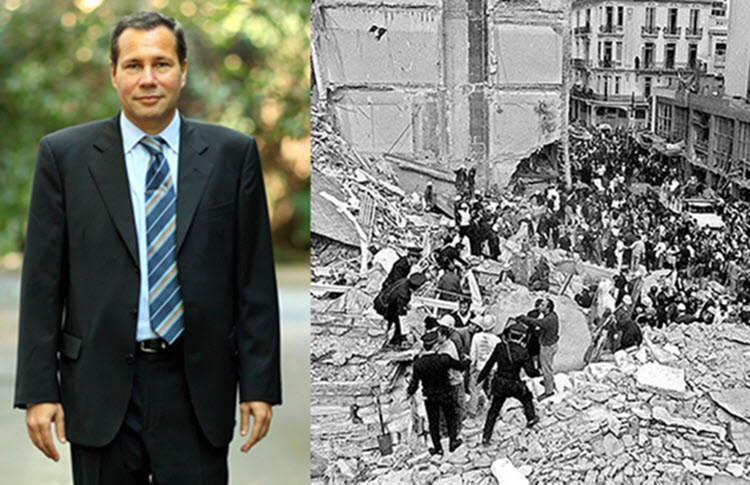 London, 4 Jun – A federal court in Argentina has ruled that special prosecutor Alberto Nisman was murdered because he accused former President Cristina Fernandez de Kirchner of trying to cover up the role of Iran in the 1994 AMIA Jewish centre bombing.

On Friday, the Argentinean Federal Chamber of Appeals backed Julian Ercolini, the federal judge who is leading the investigation. Ercolini ruled that Nisman’s death was a murder – not a suicide – back in December, two years after Nisman’s death.

Ercolini also charged security officials who were tasked with protecting Nisman at the time of his death and Diego Lagomarsino, a former employee of Nisman.

Four days later, just before Nisman was due to present the evidence of the cover-up and Iran’s involvement in the bombing, the prosecutor was found dead in his apartment with one bullet to the head.

On July 18, 1994, a terrorist from the Iran-backed Hezbollah group drove an explosive-laden truck into the AMIA Jewish centre. The identity of the driver was not discovered until Nisman named him as Lebanese citizen Ibrahim Hussein Berro.

Nisman knew that Iran had been involved, as Hezbollah rarely acts without the permission of the Regime, which funds, arms, and trains its militia. He even indicted former president Ali Akbar Hashemi Rafsanjani. Iran, however, refused to cooperate.

That is until 2013, when Iran and Argentina jointly sponsored a “truth commission” to investigate. Anyone familiar with 1984, will recognise that merely using the word “truth” does not mean that anything truthful will emerge. Indeed, American Jewish Committee president David Harris compared this truth commission with Iran to “turning to Nazi Germany to establish the facts of Kristallnacht”.

Judges Martín Irurzún and Leopoldo Bruglia wrote that the current investigation has “clues with sufficient importance to sustain as a hypothesis that the destiny of Nisman was decided as a consequence of the nature, seriousness and scope of the complaint filed a few days before”.

In non-legalese, this means that there is sufficient evidence to support Ercolini’s assertion that Nisman was murdered to prevent him from proving that the Argentine government worked with Iran to cover up Iran’s involvement in the bombing.

The judges urged Ercolini to continue the case “with the speed and seriousness that such a grave fact imposes”.

Iran’s Government Steals From Poor to Line Their Pockets, Leaving Economy in Ruins

In the four decades since the Iranian regime ascended...