Panel Discussion on Iran: IRGC and Meddlings in the Region 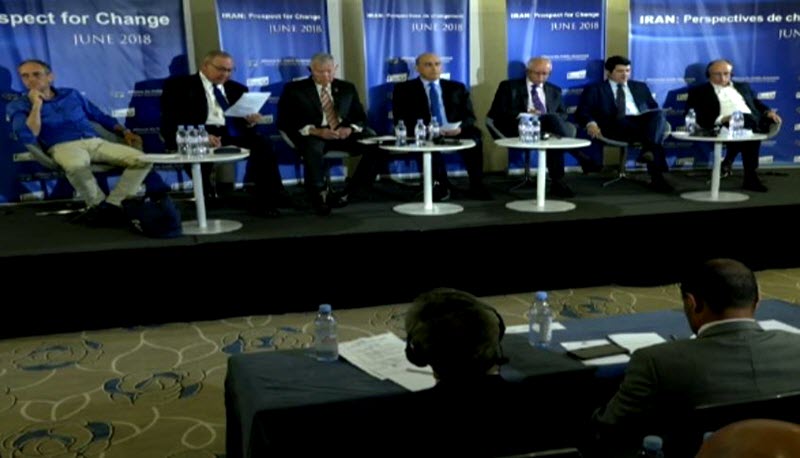 London, 29 Jun – In a panel discussion dealing with the IRGC and its meddling in the region, several distinguished speakers spoke about the threat and how it can be dealt with.

The panel discussion entitled “IRGC and Meddling in the Region” comes ahead of the Free Iran rally organised by the National Council of Resistance of Iran (NCRI) and the Mojahedin Organization (MEK) in Paris.

The panel was moderated by Walid Phares, an expert on global terrorism and Middle Eastern affairs, and he spoke about how he first became aware of the threat of the Iranian regime 28 years ago.

Raid Yassine, the Ambassador of Yemen in Paris and former Foreign Minister of Yemen, spoke about Iran’s reasons for intervening in the war in Yemen. He highlighted that the IRGC is exporting the Islamic revolution and taking advantage of the war in Yemen to do so.

#FreeIran2018 – Panel Discussion on Iran: IRGC and Meddling in the Region https://t.co/qsM1FqVQ6p

Yassine said that Iran needs to change its constitution. It is highlighted in the Iranian constitution to meddle in the region and this is one of the reasons for it doing so. He also said that before there were no problems between the Shia and Sunni Muslims. Iran has made it a problem.

The former Yemeni Foreign Minister also pointed out that the IRGC is going against the UN embargo by supplying the Houthi rebels in Yemen with weapons and missiles.

Finally, he pointed out that Yemen is receiving help from neighbours Saudi Arabia and Egypt. But not Iran. All Iran is doing is creating spy networks and making the situation worse.

Charles Wald, General (Ret.) and former Deputy Commander of U.S. European Command, said that regional aggression has gone up because of sanction relief on Iran which came into effect with the Joint Comprehensive Plan of Action (JCPOA).
Wald pointed out that instead of moderating its behaviour, Iran increased its support of Shiite forces in the region and also because the United States has been reluctant to go beyond its goal of defeating ISIS in the quest to neutralise the problems in the Middle East.

Wald said that the United States should have taken the opportunity when the Iran nuclear deal was being negotiated to go harder on Iran. He described the JCPOA as a failure because of this.

Iran is trying to consolidate its control in the region, in particular in Syria because it is a geographically strategic area, and it is using the IRGC to do so. Ward also emphasised that Iran believes its security is based on the export of its revolution.

James Conway, General (Ret.) and former Commandant of the U.S. Marine Corps, spoke about the situation in Syria where Assad’s side appreciates the presence of the IRGC. However, the situation is changing because the Syrian regime is worried that the IRGC has lost its focus, especially because of the rapidly evolving events that are taking place there. Russia is in a dilemma because Iran is its ally, but it does not want its ambitions to be compromised.

Conway stated that he believes that Qasem Soleimani, the leader of the Quds Force, does not understand the intensity of the Israeli view – the view that Israel is directly threatened by Iranian action on its border. Israel wants to strike before it is too late to curb or eliminate the threat. Conway predicted that Israel will strike hard against the IRGC.

He also said that Israel may also force Iran into making a difficult decision about whether it supports IRGC action and aggression or not.

Finally, he said that the toughest possible sanctions against Iran must be encouraged – not just from the United States, but from all nations.

Frédéric Encel, a writer and scholar of geopolitics specialising in the Middle East, spoke about the people of Iran who have taken to the streets in a major uprising starting at the end of last year. He acknowledged that the people of Iran have questions for the regime that remain unanswered. The people want to know why they are not put before conflicts abroad. They want to know where the nation’s wealth is going.

Speaking about the situation in France, Encel said that the Iranian threat has always been denied or ignored by previous French presidents. He said that although French President Emmanuel Macron was unsuccessful in his attempts to persuade US President Donald Trump to remain party to the JCPOA, he has expressed his desire to broaden the nuclear deal so that Iran’s ballistic missile activity and its behaviour in the region are addressed.

Yves Thréard, an editorialist for Le Figaro, started by saying that the Iranian regime is malignant. And not just for one or two acts; for far more. He highlighted that the people of Iran are well-aware of the true nature of the regime. The rebellions that took place in 2009, a real uprising against the regime, was not relayed to the West in an accurate way. The true extent of the uprising was toned down.

With regards to the bazaar protests that took place this week in Iran, Thréard said that the French media did not react at all. The anger of the people of the Iran was striking and significant, but it was ignored by the French media. If the same protests were happening in Algeria, he reckons that the French media would have reported extensively about it. Western policy, he said, should not allow the Iranian people to continue being oppressed.

Mohammed al-Sulami, Head of the International Institute for Iranian Studies, pointed out that militias in the region are created, supported, trained and armed by the IRGC. They are scattered across the region, from Syria and Yemen and all the way to Africa.

The power of the IRGC must not be underestimated because it controls at least 40% of the Iranian economy.

He gave several options on how the IRGC can be targeted. Firstly, political and legal confrontation with the IRGC and regime in which issues are raised about its role in the region. Secondly, containment. Ensuring that business cannot be done with IRGC entities. Thirdly, military confrontation against Iranian terror groups and militias in the region. Finally, he said that intelligence needs to be shared between governments so that everyone has the same information.