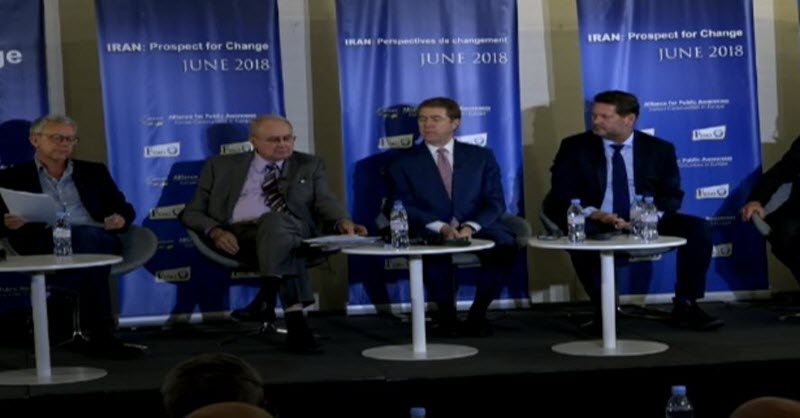 London, 2 July – On Friday, June 29, 2018, several distinguished speakers took part in a panel discussion in which they talked about the IRGC and sanctions on Iran.

Moderating the discussion was Lincoln Bloomfield, Ambassador and distinguished Fellow and Chairman Emeritus at the Stimson Center and former Assistant Secretary of State for Military Affairs. He started the discussion by pointing out the hypocrisy of a regime that allows the IRGC to sell drugs by the truckload but executes people for possessing only a small amount.

Bruno Tertrais, Deputy Director of the Fondation pour la Recherche Stratégique (FRS), emphasised than sanctions matter and that they will play an important role in forcing the regime and the IRGC to admit and accept its behaviour and belligerence.

He also highlighted that Iran lost 15 to 20 per cent of its economy when sanctions were in place. They were so crippling that they brought the regime to the negotiating table for a nuclear deal.

However, he also made it clear that sanctions are not the “magic bullet” because the regime and the IRGC have proven themselves to be resilient. So much so that entities are finding ways around sanctions. The IRGC has even adapted to them. The fine-tuning of sanctions is an art, not a science.

Tertrais said that he hopes the major disagreement between the US and the EU with regards to sanctions will not prevent certain aspects of policy from being nailed down. The political temperature, he urged, must be lowered otherwise the regime will benefit from the turmoil.

Eduard Lintner, former Deputy Minister of Interior of Germany, said that the Iranian regime’s future is in danger because of the widespread resistance in the country. He alluded to the major protests that are taking place at bazaars in the country and said that Germany has always respected the rights of the people. The German government and intelligence services have warned about the IRGC and Quds Force and have called on the Iranian government to let its people exercise their right to peacefully protest.

Michael Pregent, a Middle East analyst from the Hudson Institute spoke about the difference between sanctions now and in 2009. He said that the situation now and then is very different. The US administration wanted Iran to come to the negotiation table for a nuclear deal. Pregent said that in 2009, the IRGC and the Quds Force had an advocate and a guarantor in the US administration. Now they don’t. The administration at that time released numerous IRGC operatives with American and Iraqi blood on their hands. This would never happen under this administration.

The protests in Iran in 2009 were also very different because the people did not have the support of the United States or the West. Pregent said that the West and the United States needs to support the people and in order to be able to do this the press must report properly about what is really happening in Iran.

Sanctions, he emphasised, are not enough. He suggested that the personal fortunes of several key leaders are made public, for example, that of the Supreme Leader and Quds Force leader Qasem Soleimani. He believes that it would create disorder among the IRGC fighters to know that they are paid a thousand times less than those that put themselves at less risk.

Robert Joseph, Ambassador, U.S. Special Envoy for Nuclear Non-proliferation and Under Secretary of State for Arms Control and International Security until 2007, spoke briefly about the flaws of the JCPOA like its failure to cover ballistic missiles, and so on. However, he said that this is now behind us because Trump has decided to leave the JCPOA.

Joseph said that sanctions can work if they are part of a broader strategy that include diplomatic, intelligence and economic components.

The regime has tried to portray sanctions as being directed towards Iranian people but Joseph pointed out that this is not the case and the people of Iran know this. The people blame the Iranian regime because it has mismanaged the natural resources of the country and it supports terrorist proxies. It is corrupt to the core and the people are reacting against it. And this is essential in having sanctions that work, he stated.

Jean-Sylvestre Mongrenier, a member of the Institut Thomas More and researcher at the l’Institut Français de Géopolitique (Université Paris VIII Vincennes-Saint-Denis), said that the European strategy was to keep the deal in place and extend it with 2 or 3 more pillars, namely negotiations about the future of the Middle East and the rise of the regime in the region. He said a strong and sturdy strategy is needed and only then can we move towards the objectives.
Mongrenier said that the EU lacks vision this is having a negative effect on progress.

Iraq’s Allawi asks Syria to press Iran not to meddle