The Last Piece of This Domino Will Fall in Tehran 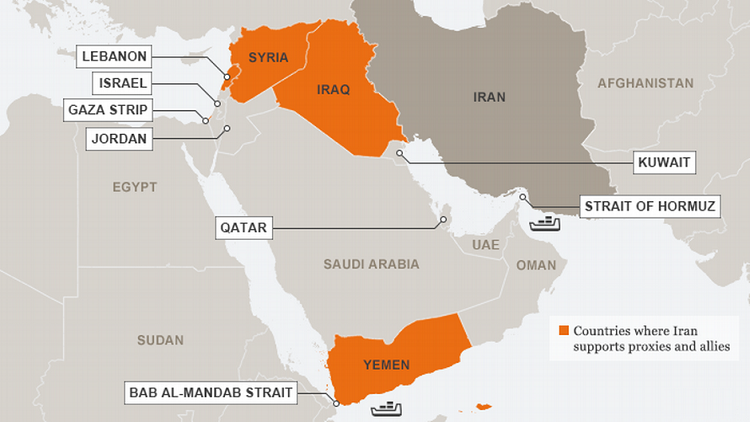 40 years ago, in tandem with founding the Islamic Republic in Iran, Ruhollah Khomeini established a long-term policy under the name “exporting the revolution”.

In reality, he pursued to export internal crises beyond Iran’s borders under the pretext of expansion of “Islam”. Khomeini’s revolution not only did not benefit the Iranian people but also pushed the region—mainly countries with a substantial Shiite majority—into endless wars.

Until a month ago, Ayatollahs seemed to be winning the hegemony war over the entire Middle East. They touted the Islamic Republic as the main player in the region due to their terrorist proxies such as Lebanese Hezbollah, Shiite militias in Iraq, Houthi rebels in Yemen, etc. Today, however, as the Iranian government’s bankruptcy is exposed and the export of its crude oil is restricted, it is losing its authority in the region.

For example, since forming Hezbollah in the 1980s, Lebanon’s Shiite society forcefully supported this “party”.

But Hezbollah’s economic mismanagement, which they inherited from their masters in Tehran, persuaded Lebanese people that the party’s leadership attempts to save Iranian interests in the region rather than being concerned about Lebanese people’s problems. Therefore, we witness Shiite youth joining protests along with other Lebanese and rising against “Hezbollah” especially in Shiite-dominated cities in the south such as Tyre and Nabatieh. Shiite protesters torched the offices of Hezbollah’s leaders in Nabatieh, which extremely terrified the party’s leadership.

Unprecedented protests in Lebanon have proven that the Lebanese people are convinced that the pro-Iran paramilitary groups and “parties” who have taken Lebanon’s destiny hostage are the real enemies of the country. This internal enemy plays as an aggressive apparatus for the Islamic Republic and jeopardizes Lebanon’s territory and assets.

Lebanese Hezbollah, of course, is only an example of Iran’s failures in the region. Likewise, Iraqi protests in Shiite provinces in Iraq proved that the current generation denies extremist and outdated interpretations of religion under the pretext of “exporting the revolution”. Therefore, as the Iranian people have realized that they cannot succumb to Ayatollahs’ will and must struggle to push them back, recent developments show that the fed-up people in the region have understood that rejecting the Islamic Republic’s influence is the only way to achieve prosperity and welfare. The reality is the denial of Ayatollahs’ political, social, cultural, and economic methods has united the people in Lebanon, Iraq, and of course Iran. In fact, what has been taking place in the region is the beginning of domino which is expected to end with the downfall of the real source for terrible conditions in the Middle East.

AP: A lawyer for the daughter of influential Iranian...

Basra bombs made in Iran

The Sun: British troops in Iraq are being bombarded...