CNN: Iran’s top human rights official said the Islamic regime is reviewing a sentence of execution by stoning for a woman convicted of adultery. 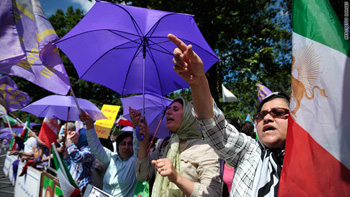 (CNN) — Iran’s top human rights official said the Islamic regime is reviewing a sentence of execution by stoning for a woman convicted of adultery.

Larijani was referring to the well-publicized case of Sakineh Mohammedie Ashtiani, who faces the possibility of execution after being convicted in 2006 of adultery.

Her lawyer, Mohommad Mostafaei, told CNN that Ashtiani confessed to the crime after being subjected to 99 lashes. She later recanted that confession and has denied wrongdoing, he said.

Her conviction was based not on evidence but on the determination of three out of five judges, he added. She has asked forgiveness from the court but the judges refused to grant clemency. Iran’s supreme court upheld the conviction in 2007.

Ashtiani’s case has drawn international attention and many human rights activists have called for the sentence to be changed.

In London, England on Saturday, protesters waved flags and chanted anti-government slogans to the beat of a drum in front of the Iranian Embassy. They condemned executions in Iran — by hanging and stoning.

But Larijani said protests from outside Iran will not affect Ashtiani’s case.

“The Western attacks have no effect on the opinion of our judges,” he told the news agency.

Larijani’s comments seemed to contradict Iran’s first public statement on the case made Thursday by the Iranian Embassy in London, England, which suggested Ashtiani would not be stoned.

It said “this mission denies the false news aired in this respect and … according to information from the relevant judicial authorities in Iran, she will not be executed by stoning punishment.

“It is notable that this kind of punishment has rarely been implemented in Iran and various means and remedies must be probed and exhausted to finally come up with such a punishment,” the embassy said.

Ashtiani’s son, who appealed Wednesday to Iran’s courts to spare his mother’s life, said he won’t accept any decision short of his mother’s freedom.

Through human rights activist Mina Ahadi, Sajjad Mohammedie Ashtiani said he would be satisfied only when Iran’s judiciary officially drops the charges against her.

Ahadi has told CNN that only an international campaign designed to pressure the Islamic regime in Tehran could save Sakineh Ashtiani’s life.

“Legally, it’s all over,” said Ahadi, who heads the International Committee Against Stoning and the Death Penalty, earlier this week.

Ashtiani’s son wrote in an open letter to government officials that there was neither evidence nor legal grounds for his mother’s conviction and sentence. He said the family has traveled six times from their home in Tabriz to Tehran to speak with Iranian officials, but in vain.

“So I have no option but reaching out to them this way,” he said earlier in the week.

Why, he asked, has an accused been twice prosecuted on the same charge when Islamic criminal law allows prosecution only once?

Sajjad Ashtiani told CNN that he visits his mother every Monday in jail, never knowing whether that meeting will be their last.

Reuters: Iran will continue its uranium enrichment activities, including...