The Guardian: Sakineh Mohammadi Ashtiani, the Iranian woman sentenced to death by stoning, was told on Saturday that she was to be hanged at dawn on Sunday, but the sentence was not carried out, it emerged tonight. 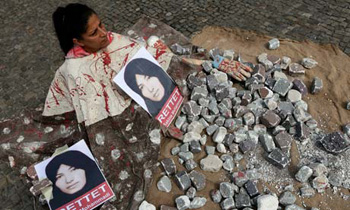 Sakineh Mohammadi Ashtiani, the Iranian woman sentenced to death by stoning, was told on Saturday that she was to be hanged at dawn on Sunday, but the sentence was not carried out, it emerged tonight.

Mohammadi Ashtiani wrote her will and embraced her cellmates in Tabriz prison just before the call to morning prayer, when she expected to be led to the gallows, her son Sajad told the Guardian.

“Pressure from the international community has so far stopped them from carrying out the sentence but they’re killing her every day by any means possible,” he said.

The mock execution came days after prison authorities denied family and legal visits to Mohammadi Ashtiani. Her children were told she was unwilling to meet them while she was told, also falsely, that no one had come to visit her.

Sajad, 22, heard the latest evidence of psychological pressure on his mother when he spoke to her by phone yesterday. “They are furious with the international outcry over my mother’s case so they are taking revenge on her,” he said. “The more the pressure comes from outside Iran, the more they mistreat her.”

Protest rallies highlighting her plight were held in 100 cities on Saturday.

Mohammadi Ashtiani, a 43-year-old mother of two, was flogged 99 times for having an “illicit relationship outside marriage” in 2006 but another court reviewed her case after her husband was murdered. She was acquitted of murder but found guilty of adultery and sentenced to death by stoning.

Since her case has captured world attention, Iranian officials have claimed she was an accomplice to the murder of her husband although her government-appointed lawyer, Houtan Kian, has accused the government of inventing charges against her.

Sajad said he believes the only reason his mother is still alive is because of the international campaign for her release. “I beg everybody in the world to continue their support for my mother. That is the only way she might be spared from the death sentence,” he said.

In a visit to Iran’s judiciary office in his home town today, Sajad was told that the file on his father’s murder case has been lost. “They are lying about the charges against my mother. She was acquitted of murdering my father but now the government is building up their own story against her.”

Last week, Kian’s house was ransacked by plain-clothes officials and his documents, including one which shows Sakineh was acquitted of her husband’s murder, were confiscated. Since then, they have been unable to find a copy of the sentence.”They are destroying all our evidence,” Sajad said. “They were not unusual documents and evidence. They were just the official documents of my mother’s sentence. They want to destroy them all because they know there are lots of discrepancies and contradictions in them.”

Among them is the fact that no-one has been named as being involved in her putative extramarital relationship.

Mina Ahadi of Iran Committee against Stoning (ICAS) said: “Look how easily they are accusing and insulting Carla Bruni-Sarkozy and you would realise how bad they are treating Sakineh and women in general in Iran and how they can build up dossier against people out of nothing and sentence them to death by stoning.”

The foreign ministry in Paris said it was “unacceptable” for Keyhan to have said she was “proud of her immoral acts” and “deserved to die”. Iran’s foreign ministry spokesman urged the media to avoid “inappropriate and insulting words.”

AFP: A senior Iranian official said Monday that this...