AP: The European Union has condemned the death sentence by stoning for a widowed Iranian woman convicted of adultery. 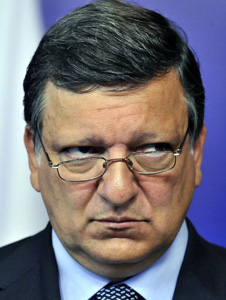 BRUSSELS (AP) — The European Union has condemned the death sentence by stoning for a widowed Iranian woman convicted of adultery.

European Commission President Jose Manuel Barroso said Tuesday in his first State of the Union address to parliament that he is “appalled” by the news of the sentencing, and called it “barbaric beyond words.” He received long applause.

The sentence against Sakineh Mohammadi Ashtiani was put on hold in July after an international outcry over the brutality of the punishment, and it is now being reviewed by Iran’s supreme court.

Ashtiani’s lawyer has said there are still worries the delayed execution could be carried out soon with the end of a moratorium on death sentences for the Muslim holy month of Ramadan.

THIS IS A BREAKING NEWS UPDATE. Check back soon for further information. AP’s earlier story is below.

TEHRAN, Iran (AP) — Iran is scoffing at European concern over the case of an Iranian woman sentenced to be stoned to death on an adultery conviction.

He says Europeans who believe freedom for murderers serves human rights should release their own murderers from jail.

He said offers of talks with Iranian officials were welcome, but only on bilateral and international issues, not the Ashtiani case.

France and Italy have urged Iran to show flexibility in the case. The Vatican has raised the possibility of using diplomacy to try to save her life.

Brexit and Trump are bad for business with Iran