AFP: A vocal Iranian women’s rights activist and journalist, charged with “warring against God”, has been released after posting bail of around 500,000 dollars, an opposition website reported. 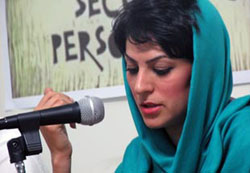 TEHRAN (AFP) — A vocal Iranian women’s rights activist and journalist, charged with “warring against God”, has been released after posting bail of around 500,000 dollars, an opposition website reported.

Nazar-Ahari, 26, had faced trial on charges of “Moharebeh” (warring against God), conspiring and gathering to commit a crime, propaganda against the regime and harming public order, the report said.

On September 4, her lawyer Mohammad Sharif told the ILNA news agency that Nazar-Ahari’s trial had ended.

“After presenting the last defence, the end of the trial was declared,” he said. “We are awaiting the verdict and I am not pessimistic about the fate of the case.”

Kaleme had previously reported that she had been jailed since December 2009 and was also charged with having ties with the exiled opposition People’s Mujahedeen of Iran (PMOI), the Tehran regime’s most hated foe.

She was rearrested in December last year while on her way to the holy city of Qom for the funeral of top dissident cleric, Grand Ayatollah Hossein Ali Montazeri.

The Iranian authorities launched a widespread crackdown on critics in the wake of the 2009 poll which saw Mahmoud Ahmadinejad re-elected, sparking mass street protests amid allegations that the it had been rigged in his favour.

Scores of reformist politicians, journalists and rights activists seen as close to the opposition were rounded up, and many have been sentenced to heavy jail terms on charges of harming national security and provoking unrest.

At least 10 people arrested in street protests have also been given death sentences.

Since the 1979 Islamic revolution, the Iranian regime has executed scores of opponents after finding them guilty of “Moharebeh.”

Irans Larijani to meet IAEA chief in Vienna on Tuesday